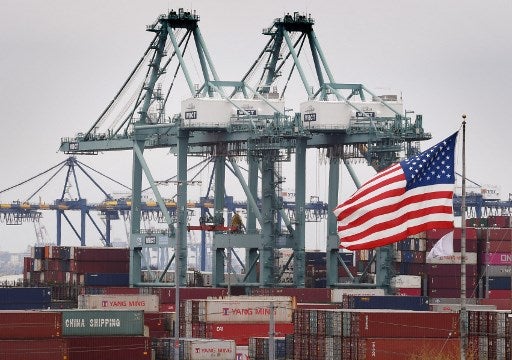 Chinese shipping containers are stored beside a US flag after they were unloaded at the Port of Los Angeles in Long Beach, California on May 14, 2019.  (Photo by Mark RALSTON / AFP)

BEIJING — Condoms, perfume, wine and pianos are among a cocktail of American products that will be hit by a steep increase in Chinese tariffs on Saturday as Beijing retaliates in an escalating trade war.

The move will cap a week that was marked by a heated war of words and Chinese threats to curb exports of rare earths, which are key to US tech industries, after President Donald Trump blacklisted telecom giant Huawei.

Washington and Beijing resumed their tariffs battle earlier this month after trade talks in Washington ended without a deal, with the US side accusing Chinese negotiators of reneging on previous commitments.

The countries have exchanged tariffs on $360 billion in two-way trade so far.

Trump more than doubled punitive tariffs on $200 billion in Chinese goods to 25 percent, and launched the process to hit nearly all remaining imports from the Asian country.

China responded by announcing that it would increase tariffs on $60 billion in American products on June 1, giving some room for a potential resolution which has not materialised.

Since then, China has warned that the US must show “sincerity” if negotiations are to resume and angry officials accused Washington this week of engaging in “naked economic terrorism.”

The US tariffs appear to have already had an impact on Chinese manufacturing activity, which contracted more than expected this month, official data showed on Friday.

Now China is hitting back Saturday with tariffs ranging from five percent to 25 percent on 5,410 products.

Those facing the 25 percent hike include:

– Beauty products such as perfume, eye makeup and lipstick.

– Kitchenware such as ovens, microwaves and coffee machines.

– Liquor including gin, wine and tequila.

Tariffs are not the only weapons in the trade war.

The Trump administration has issued orders to curtail Huawei’s access to American components it needs for its equipment — though a 90-day reprieve was issued.

Chinese state media suggested this week that Beijing could hit back by stopping exports of rare earths to the United States, cutting off key materials used to make everything from smartphones to televisions and military equipment.

Chinese mines accounted for 71 percent of the world’s rare earths production in 2018, according to the US Geological Survey, down from 80 percent in 2017 and 95 percent a decade ago.

Cutting off exports to the US could give Beijing leverage in trade talks as China supplies 80 percent of the rare earths imported by the United States.

But analysts say China may be reluctant to target the materials because it could hasten a global search for alternative supplies of rare earths.