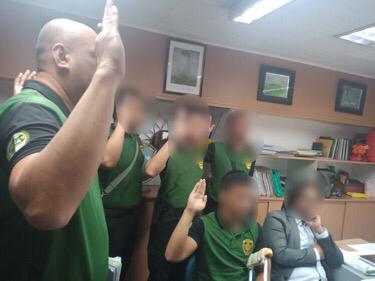 PDEA agents who seized the 276 kilograms of “shabu” intercepted at the MICP last March, takes oath on Friday, May 31, 2019, before State Prosecutor Mary Jane Sytat during the filing of cases against Jacky Co and 16 others at the DOJ. (Photo from PDEA)

MANILA, Philippines —  The Philippine Drug Enforcement Agency (PDEA) filed before the Department of Justice on Friday drug charges against Chinese national Xu Zhi Jian alias Jacky Co and 16 other personalities tagged in the smuggling of P1.8 billion worth of “shabu” or methamphetamine hydrochloride.

Co was earlier tagged by Senator Panfilo Lacson as the one who allegedly facilitated the entry into the country of 276 kilograms of “shabu” seized by authorities at the Manila International Container Port (MICP) in March 22.

In a statement, PDEA said charges for violation of Section 4 (Importation of Dangerous Drugs), in relation to Section 31 (Additional Penalty if Offender is an Alien) of Republic Act (R.A.) No. 9165 or The Comprehensive Dangerous Drugs Act of 2002, as amended by R.A. No. 10640, were filed against the officers and directors of Wealth Lotus Empire Corporation and Fortuneyield Cargo Services.

Charges for violation of Section 4 in relation to Section 30 (Criminal Liability of Officers of Partnerships, Corporations, Associations or other Juridical Entities) of R.A. No. 9165 as amended by R.A. No. 10640 were also filed against them, according to PDEA.

Wealth Lotus Empire Corporation based in Sampaloc, Manila and Fortuneyield Cargo Services are the alleged consignee of illegal drugs discovered at the MICP.

“Documents and affidavits would show that the acts committed by the respondents have a vital connection to the chain of conspiracy, that without such acts, the unlawful importation would be unsuccessful,” Director General Aaron Aquino said.

“Filing the appropriate charges will serve as a warning to those individuals, especially to government employees, who extend assistance in drug trafficking,” Aquino said. (Editor: Mike U. Frialde)