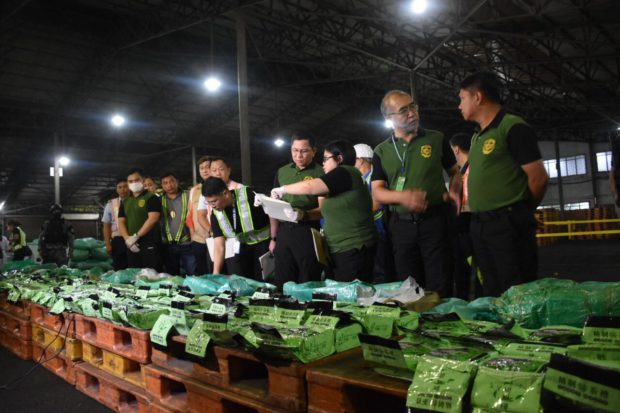 MANILA, Philippines — The Bureau of Customs (BOC) and Philippine Drug Enforcement Agency (PDEA) confiscated on Friday an estimated P1.8 billion worth of shabu at the Manila International Container Port.

In a press briefing, PDEA chief Director General Aaron Aquino said a total of 276 kilograms of shabu were seized..

110 kilograms of shabu were seized in two recent operations in Muntinlupa City.

READ: PDEA agents seize P1.13-B worth of shabu in Muntinlupa

Aquino said they were alerted by counterparts from Vietnam regarding the contraband on board Callo Bridge from Ho Chi Minh City.

The confiscated contraband were wrapped in a Chinese tea wrapper similar to those seized by Vietnamese authorities last March 20.

In the buy bust operation in Ho Chi Minh City, Vietnamese authorities seized 300 kilograms of shabu from a drug ring allegedly operated by Chinese national who uses a textile company as a front. /gsg