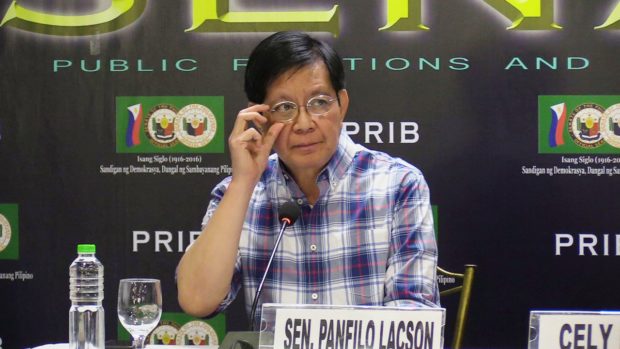 MANILA, Philippines — Sen. Panfilo Lacson on Wednesday named a Chinese national who was allegedly behind the P1.8 billion-worth of crystal meth, or shabu, that arrived in the Philippines last March 22.

Lacson said Zhijian Xu alias Jacky Co, was responsible for the 276 kilos of suspected shabu that was seized by authorities at the Manila International Container Port.

He said the drugs, wrapped in tea packaging, were found inside a 40-foot container. The shipment was declared as plastic resin.

“We have it on good information that the main person responsible for this shipment is a Chinese national named Zhijian Xu alias Jacky Co, who was born in Fujian, China,” Lacson said in his privilege speech at the Senate.

According to Lacson, Co is among the most wanted persons in China and is included in the Interpol watchlist.

“Jacky Co, subject to ongoing verification by our local law enforcement agencies with their Southeast Asian counterparts, is said to be on the Interpol watch list and among the wanted personalities in China,” Lacson said.

The senator also accused Co of being involved in a kidnapping syndicate in the Philippines demanding for ransom through wire transfer or offshore banking.

[The last kidnapping Jacky Co was involved in had a ransom of P250 million, Mr. President. Based on documents we have collected, he is the owner of the Feidatong International Logistics Company that is based in Bulacan.]

Lacson said Co was also in the Philippines during the shipment of the drugs and flew to Vietnam a few days after the drugs were seized.

“But what is interesting is that during the time of the said shipment, Jacky Co was in the country monitoring,” he said. “Even revolting is, in spite of his alleged involvement in criminal activities here and in China, he had left Manila via Philippine Airlines flight bound for Vietnam passing through Singapore on April 3, 2019, few days after the seizure of his shipment of drugs.”

[He wasn’t even in a hurry to get out and confidently flew out of NAIA.]

Lacson proceeded to question how Co was able to leave the country despite the Bureau of Immigration using “state-of-the-art, biometrics-based system for its computers in all international airports nationwide.”

“While we surely celebrate high impact operations, shenanigans embedded in the rotten system tend to overshadow our progress,” Lacson said.