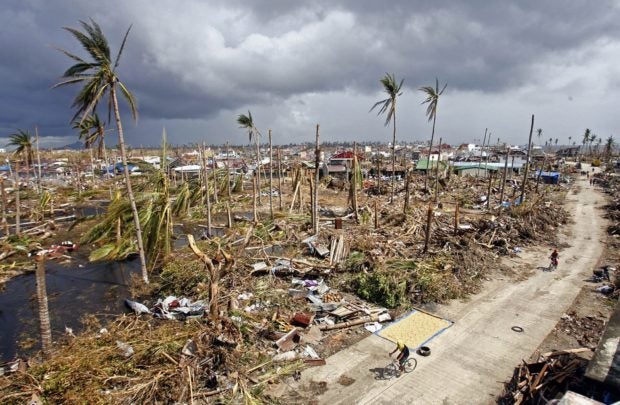 DESOLATE LANDSCAPE A seaside barangay in Palo, Leyte, is left in ruins by Supertyphoon “Yolanda” in 2013. —INQUIRER FILE PHOTO

According to COA’s audit report dated May 20, all of the P135,391,701.96 funds allocated to the National Disaster Risk Reduction Management Council (NDRRMC) were sourced from grants from local and foreign sectors.

“OCD did not receive any fund for the victims of Super Typhoon Yolanda from DBM and other National Government Agencies but received donations from both local and foreign sources,” COA explained.

Super Typhoon Yolanda ravaged through the country in November 2013 during the administration of former President Benigno Aquino III. It was then considered as the strongest storm to make landfall in the world.

COA said that based on NDRRMC data, more than 3.4 million people have been affected, while 4 million have been displaced

READ: WHAT WENT BEFORE: Supertyphoon ‘Yolanda’

COA earlier also called out OCD and NDRRMC for providing financial assistance to the relatives of only one deceased victim.

In the same report, the commission said that the reason behind the poor disbursement of financial aid may have been due to the numerous documents required before they are considered qualified.

Injured persons were allegedly asked to present medical certificates, police reports, and endorsement for the payment of claims.

Relatives of dead persons, on the other hand, should provide police reports, death certificates, certification from the barangay captain, proof of relationship with the victim, and other endorsements.

“The production alone of the above documents could be very burdensome for some victims, which could be one of the causes of low utilization of the donated funds,” COA said.