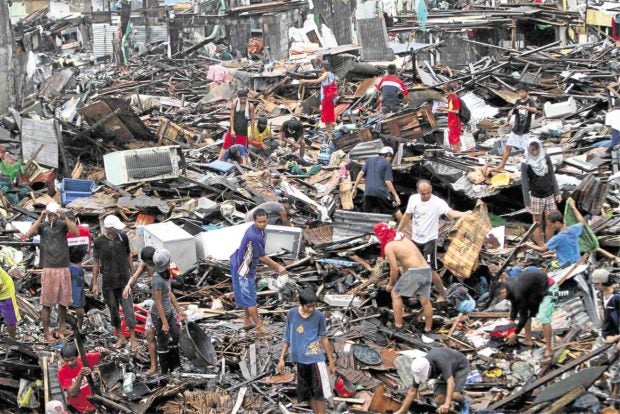 At least 16 million people in 44 provinces were affected when Supertyphoon “Yolanda” (international name: Haiyan) struck the Visayas on Nov. 8, 2013.

More than a million families, or about 5.13 million people, were evacuated at the height of the typhoon, which damaged 1.14 million houses. Total cost of damage was placed at P95.5 billion.

The government’s P160-billion reconstruction master plan approved in November 2014, calls for 205,000 new homes for roughly a million people to be built in areas away from coastal danger zones.

But only 10 percent, or 20,893 houses, had been built as of March 2016, according to the Community of Yolanda Survivors and Partners, a newly formed alliance of 163 community organizations and nine nongovernment organizations.

On Nov. 8, 2016, during the commemoration of the onslaught of Yolanda, President Duterte ordered officials to complete the construction of new shelters for the survivors within a month.

But when the President returned to the city in January 2017, more than 8,000 families were still waiting to be relocated to permanent shelters.

TAGS: Supertyphoon Yolanda, What Went Before