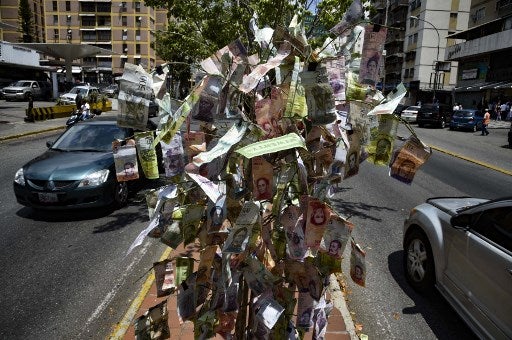 View of a tree decorated with banknotes which are worthless – as a result of inflation – as people queue at a gas station (L) in Caracas, on March 10, 2019, during a power outage.  AFP

CARACAS, Venezuela — Venezuela ended 2018 with inflation above 130,000 percent while its crisis-hit economy shrank by nearly half in the last five years, the central bank claimed Tuesday – a figure far below international estimates.

Millions of people have fled the country as astronomical rises in the cost of consumer goods and broader economic woes have made food and basic supplies unobtainable for average people.

The International Monetary Fund (IMF) predicts inflation of 10 million percent by the end of the year, a nearly eight-fold spike from the 1.37 million percent it estimated for 2018.

Mismanagement of the country’s economy and “highly distortionary policies” such as the use of price controls and directed lending was responsible for the country’s dire fiscal straits, the World Bank said in an April report that forecast a further 25 percent GDP cut this year.

The central bank also reported that oil exports – which account for 96 percent of the country’s revenue – plummeted to $29.8 billion in 2018, down from $71.7 billion in 2014, when oil prices collapsed and the country’s political and economic crisis began.

Oil prices have since rebounded, but a drop in production has hampered a return to previous revenue levels.

The central bank stopped providing official figures three years ago without giving an official reason, though it had already been holding back the amount of economic information it reported.

Top IMF official Alejandro Werner told AFP in April that Venezuela’s economic implosion had been “even bigger than we anticipated”.

“Based on experiences with countries that have suffered similar collapses… for most of them to recover living standards similar to what they had before the collapse it has been a question of a decade or decades,” he said. /ee