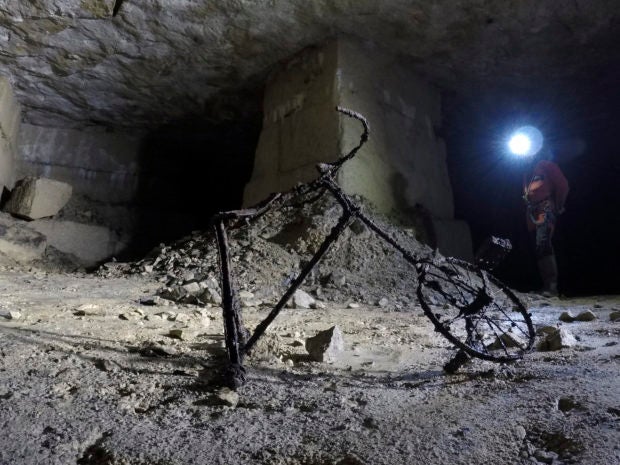 In this photo taken on Friday May 17, 2019, a childs bicycle quietly rusts in a quarry in Fleury-sur-Orne, near Caen, Normandy. Archeologists are making 3-D models of the network of tunnels that served as a bomb shelter for hundreds of civilians during the battle of Normandy that followed D-Day. (AP Photo/John Leicester)

CAEN, France — The emotion of being liberated from Nazi occupation was so sweet and intense that French refugees burst into song, a spontaneous rendition of “La Marseillaise” that echoed around the underground network of dank, dark tunnels where they had been sheltering for weeks since D-Day, amid filth, fleas, and the rumble of bombs.

A girl of just 11 in that world-changing summer of 1944, when the Allied liberation of western Europe began, Yvette Lethimonnier, recalls with vivid clarity how their saviors, a unit of Canadian troops, saluted when they found the refugees in their cavernous hiding place. Even the most elderly clambered to their feet, roused by the thrill of sudden freedom. All their voices joined in belting out the rousing words of the French anthem: “Arise children of the fatherland, the day of glory has arrived!”

“It was such a deliverance, infinite happiness,” the now 86-year-old Lethimonnier remembers. “In fact, every time I hear ‘La Marseillaise,’ it has an indescribable effect on me. Because I see my father again, in the quarry, singing it.”

Without the huge underground stone quarries that sheltered thousands of people in and around the city of Caen, a major objective of the Allied force that landed on beaches to the north on June 6, 1944, the civilian toll of roughly 20,000 French dead in the battle for Normandy might have been steeper still.

When World War II veterans gather with leaders of still-grateful Allied nations in Normandy for the 75th anniversary of D-Day to remember the feats and sacrifices,  there’ll also be lower-key ceremonies to honor civilian casualties. Even now, the work of understanding how civilians in Normandy suffered through and survived their liberation continues. Archeologists using laser scanners are mapping the quarry where Lethimonnier and other families found refuge in the outskirts of Caen, shedding new light on an under-explored aspect of D-Day history dominated by Allied military exploits.

The cavern, inaccessible to the public but visited by an Associated Press team, is one of the best-preserved makeshift bomb-shelters in Caen, a 1944 time-capsule filled with traces of the civilians who hid there and their ordeals. There are abandoned shoes, a doll’s head, broken plates, a rusty key, cutlery, a rosary, and other personal objects that spark the imagination. Abandoned vials show where a first-aid station used to be. The long-rotten remains of straw beds amid the puddles and gooey mud eloquently speak of the extreme discomfort the refugees endured.

“We slept as we could,” Lethimonnier recalled. “There were lice, bedbugs, fleas, cockroaches.”

The extreme precision of laser mapping is allowing programmers to computer-generate 3-D visualizations of the underground space and its abandoned objects, preserving the history. When posted online, possibly next year, the 3-D modeling will allow viewers to virtually tour the cavern and get a taste of the refugees’ rat-like existence.

“It will enable the public to understand what happened in the quarry, to visit it without actually going down,” said Laurent Dujardin, a Caen historian who has documented the quarries’ wartime role and is working with the archeological teams. “The aim is to make what happened here understandable.”

To dislodge Adolf Hitler’s forces from towns and villages of northern France where they’d had four years to build defenses and dig in, the Allies sometimes had to destroy them, dropping tens of thousands of tons of bombs, firing salvos from warships at sea, and unleashing hundreds of thousands of ground troops who battled their way inland from the landing beaches. 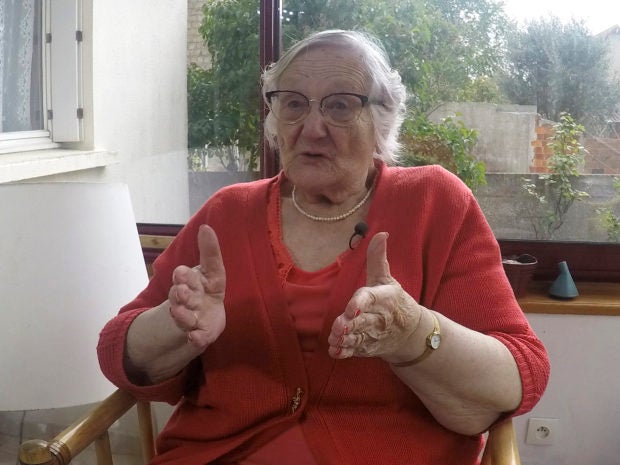 In this photo taken on Friday May 17, 2019 in Caen, Yvette Lethimonnier, 86, recounts how she and her family survived after D-Day in a Fleury-sur-Orne quarry, near Caen, Normandy. A girl of just 11 in that world-changing summer of 1944, when the Allied liberation of western Europe began, Yvette Lethimonnier, recalls with vivid clarity how their saviors, a unit of Canadian troops, saluted when they found the refugees in their cavernous hiding place. Even the most elderly clambered to their feet, roused by the thrill of sudden freedom. All their voices joined in belting out the rousing words of the French anthem: “Arise children of the fatherland, the day of glory has arrived!” (AP Photo/John Leicester)

St.-Lo, to name just one martyred Normandy town, was all but destroyed and later unflatteringly named “The Capital of the Ruins” by playwright Samuel Beckett. Allied leaflets dropped before raids urged people to: “Leave now! You don’t have a minute to lose.”

Caen was heavily bombed and shelled and some 2,000 of its inhabitants were killed. D-Day planners expected Allied troops to quickly take the strategic city but German resistance was so furious that its liberation instead took six weeks. A saving grace for Caen were the quarries from which its famous creamy limestone had been extracted for centuries, for churches and castles and faraway monuments such as the Tower of London and Cologne Cathedral. Roughly one-third of the 60,000 inhabitants took refuge in the caverns, the biggest sheltering thousands of people.

During breaks in the fighting, refugees scavenged outside for food. Lethimonnier said her father sliced meat for stew off the carcasses of farm animals that had been killed. She would sneak out, too, clambering up a narrow shaft from the quarry to see the destruction for herself. On one such escapade, chasing a rumor that spread among kids in her cave that soldiers outside were distributing chocolate, she was injured in the left leg by shrapnel from a shell-burst.

“The smells were horrific. There was a smell of burning. You could see a foot, an arm or a body in the ruins,” Lethimonnier recalled. “The smoke lingered for I don’t know how long.”

The inevitable vanishing of witnesses from World War II makes the work of preserving the history only more urgent, a race against time. To help archeologists better understand how refugees organized themselves, with latrines in one corner, a makeshift kitchen by the quarry entrance, and families marking out spaces in the dirt, Lethimonnier agreed to go back into the dark, lowered into the quarry on a rope down the same narrow shaft she’d scaled as a girl.

She said returning to the cave was cathartic. A picture of innocence when she went down the hole on the morning of D-Day, muddying the white dress she was wearing to mark her first communion two days earlier, Lethimonnier was a changed kid when her family finally emerged after nearly two months, with the Allies then heading for Paris and beyond. Their house was ruined, leaky with blast holes. She remembers her father taking the boots off a German officer’s corpse, because he’d lost his own shoes.

Lethimonnier said she has come to understand that destruction couldn’t be avoided.

“They did what was necessary for us to get back our freedom,” she said. “It was difficult. But the simplest thing is to say, ‘Thank you’.” /kga