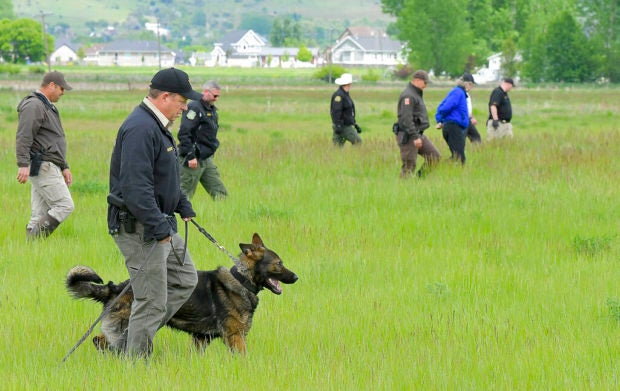 Searchers look for signs of five-year-old Elizabeth Shelley on Monday, May, 27, 2019 in Nibley, Utah. Shelley was reported missing from her home on Saturday morning, May 25. (Eli Lucero/Herald Journal via AP)

LOGAN, Utah — DNA has provided further evidence that the 21-year-old uncle of a missing five-year-old girl in Utah is behind her disappearance, police said Tuesday.

Evidence also indicates the girl, Elizabeth “Lizzy” Shelley, is hurt, authorities said, though they did not elaborate. She was reported missing Saturday morning by her family after they woke up.

“We would never dash the hope that we would find her alive,” Logan Police Chief Gary Jensen said at a news conference. “But it’s certainly a concern for us at this point; Lizzy’s safety.”

Jensen said police have “strong evidence,” including the DNA, linking Alex Whipple to the disappearance of Shelley.

He was denied bail Tuesday during a court hearing in Logan in which he appeared via video in a dark blue jail uniform. He slumped back slightly in his chair, eyes cast downward.

His attorney, Shannon Demler, had argued that Whipple should get bail because he has not been charged in connection with the disappearance.

The girl was last seen before family members went to bed about 2 a.m., Jensen said. The uncle was staying at the house that night but doesn’t live there.

The ongoing search is concentrated on a one-half mile (0.8 kilometer) area around the family’s home in Logan, in a picturesque mountain valley near the Idaho border about 80 miles (129 kilometers) north of Salt Lake City.

Teams searched a number of locations, including an empty field near downtown Logan, where about nine police officers spread out in a line, eyes scanning the ground.

Nancy Buttars, 63, said crews searched Monday along a river behind her house, walking up and down the banks and through underbrush, as well as along railroad tracks.

She said she had searched her property herself after hearing alerts about the missing girl.

For many people, the case has disturbed the close-knit sense of tranquility that comes with living in a small community.

“I just hope they find her and put an end to it,” Buttars said.

Betty Balls, 55, a hotel housekeeper in nearby Wellsville, came to the courthouse for Whipple’s hearing to show support for the family, though she doesn’t know them personally.

“Please, wherever she is, bring her home to her family,” Balls said through tears. “This is a safe environment. The kids play outside, and you know they’re out there. Nothing like this should happen at all.”

Whipple was found Saturday afternoon in a remote area about 10 miles from the family home, several hours after the girl was reported missing. He was combative and refused to identify himself several times when police spotted him walking in a remote area, according to court documents.

Police found him with a metal baseball bat, alcohol and drug paraphernalia. Jensen said the bat isn’t part of evidence in the disappearance.

Whipple was booked into Cache County Jail for investigation of probation violations, failure to identify himself to police and possession of a controlled substance.

In 2016, Whipple was convicted of assaulting his roommate in an incident of domestic violence, according to court records.

The same year, Whipple was arrested after police said he stole his neighbor’s car and drove under the influence of alcohol. A 40-mile (64 kilometers) chase ended when the Utah Highway Patrol spiked the tires of the car, court documents show.

Whipple was sentenced to prison in March 2018 but his term was suspended, and he was instead ordered to serve 180 days in jail and five years of probation. /jpv