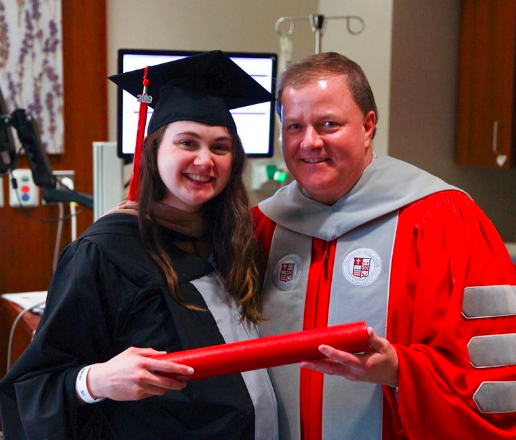 A young woman from Connecticut, USA, had to miss her graduation from business school after she went into labor on the same day as the ceremony.

Shannon Kaschak was slated to receive her MBA degree from the Sacred Heart University, as per Good Morning America on May 24. It was supposed to be a special occasion for Kaschak, whose diploma was to be presented by her father, who also earned an MBA and is on the university’s board of trustees.

“I had worked hard for three years,” Kaschak said in the report. “I was pretty sad I wouldn’t be able to make the ceremony.”

Kaschak went into labor on May 11, prompting her to change her graduation plans, from stage to the hospital. Her father, however, was able to work things out, as per the report, and was able to deliver the robes and diploma to his daughter just in time.

In Kaschak’s post on social media on May 12, she can be seen wearing her academic robes and holding up her diploma with her dad. Another photo showed a blurry Kaschak posing with her socks as she lay down on the hospital bed.

I’m sure most of you have guessed this, but my graduation plans changed. We will send you an update when Tiny Girlfriend…

“It was a lot all at once,” the new mom said of the experience, adding she would tell her daughter one day that nothing is impossible if she is determined. “I’ll tell her she can do anything she sets her mind to.”