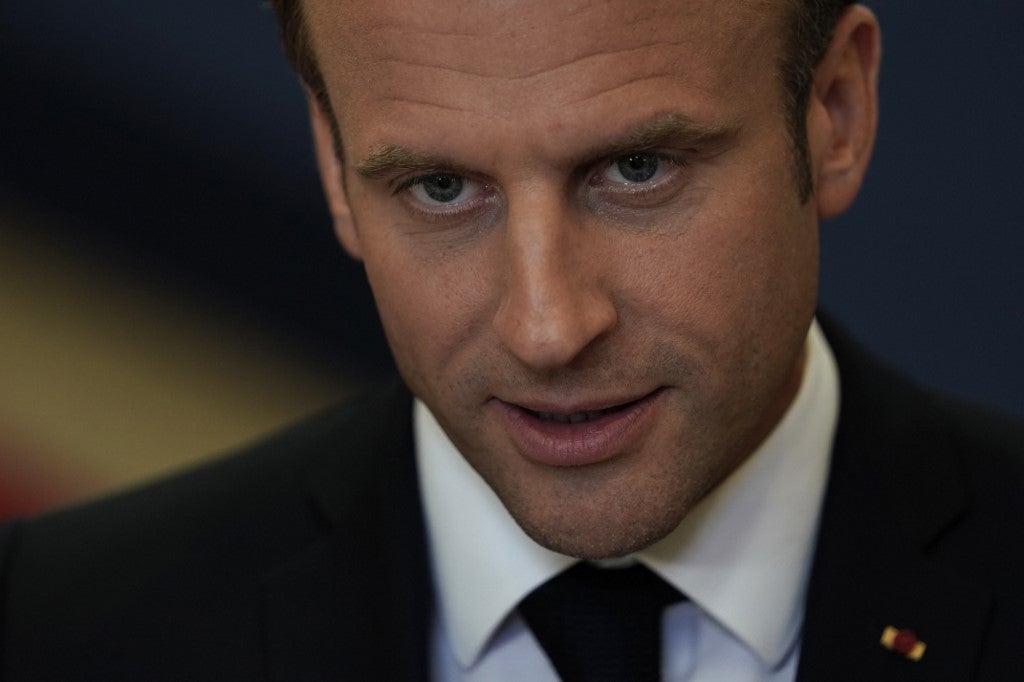 French President Emmanuel Macron speaks to the press as he leaves after a European Union (EU) summit at EU Headquarters in Brussels on May 28, 2019. AFP

BRUSSELS, Belgium — European leaders launched a summer of wrangling over their union’s political direction on Tuesday with a clash over nominations for Brussels’ top job.

After dinner in Brussels, Germany’s Chancellor Angela Merkel left saying she stood by her center-right group’s candidate to lead the European Commission for the next five years.

“We have responsibility towards our voters, and we will have to wait and see. It’s too early to speak about this, everyone needs to show tolerance and a willingness to engage in compromise.”

But President Emmanuel Macron of France said the shifting political balance in the European Parliament after last week’s election had broken the “prison” of the candidacy process.

“The key is that the people in the most sensitive posts share in our project and are as charismatic, inventive and competent as possible,” he said.

“Everyone will have to move, and we are going to have build a consensus. In this framework the role of France, having broken out of the prison of spitzenkandidats, is to build a dynamic and credible movement, behind a project.”

France — backed by progressive allies like Spanish premier Pedro Sanchez — wants a candidate who could support the program of a broader alliance of liberal, social democratic Green and center-right MEPs.

The president of the European Council, Donald Tusk, will now go away and try to draw up a list of nominees for top EU roles that a majority of leaders could get behind at a June 21 summit.

If they fail find consensus, the debate will drag on, as it did in 2014, when it took several summits to agree on all the top jobs.

Alongside the Commission role, the leaders also have to choose a new Council president, a foreign policy chief, a speaker for the European Parliament and a central bank director.

After the summit broke up, Macron said he expected the nominations to be “even-handed — two men and two women, with a geographical balance,” echoing Tusk’s own description of the recruitment campaign that lies ahead.

Earlier in the day, the leaders of the Greens, the socialist and the center-right groups in parliament insisted that the leaders agree to a “spitzenkandidat” or lead candidate nominated by them to the commission.

But the centrist ALDE group, which now includes members of Macron’s liberal movement, refused to sign the pact, and the French leader is building support for a progressive candidate.

Tusk insisted that leaders had not fallen out over names, but had instead discussed the process through which they will find names acceptable to both the 28-nation Council and the new 751-seat parliament.

Weber’s European People’s Party (EPP) remains the biggest bloc in the European Parliament despite losing some 40 seats in the weekend election and losing the power to wield a majority in coalition with the center-left S&D group.

But he is seen as short on charisma and has no executive experience — a fact alluded to repeatedly by Macron.

As he arrived, Macron insisted he did not want to talk about possible names for the job — before listing center-left pick Frans Timmermans, EU Brexit negotiator Michel Barnier and EU Competition Commissioner Margrethe Vestager as suitable candidates, while pointedly omitting Weber.

An EU source said Weber could seek the presidency of the European Parliament if he fails in his Commission bid — a consolation prize not open to Vestager or Timmermans.

Under EU treaty law, the European Council nominates a commission president, then the parliament ratifies their choice.

But the procedure, while seemingly straightforward, masks a complex power struggle between rival states and ideological blocs and between the leaders and parliament itself.

The leaders of France, Spain, Belgium, Portugal and the Netherlands — all liberals or socialists — met over lunch on Tuesday and a Spanish government source said an “alliance of progressive forces” was taking form.

This could also work against the conservative Weber. Udo Bullmann, the leader of the center-left S&D parliamentary group, said Merkel was becoming “kind of nervous” as control of the process slipped from her grasp.

The EU elections saw ALDE and the Greens gain ground — ending the EPP and S&D groups’ ability to form a coalition majority without their cooperation.

Momentum from the results is emboldening some liberals to push their candidate Vestager, with Luxembourg Prime Minister Xavier Bettel saying she would be “excellent”.

As a woman, Vestager would help the Commission shed its “male, pale and stale” image — there has never been a female president — and she has a certain public profile after taking on the US internet giants as a regulator.

Timmermans, a center-left Dutchman with more executive experience, will have the S&D’s backing but ALDE, while dubious about the process, could back Vestager. /cbb