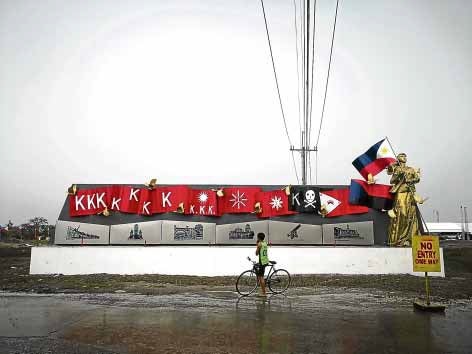 FLAG GRAVE A memorial at Imus City’s Heritage Park features the flags used by Filipino revolutionaries. On June 11, the park will become the resting place of ashes of thousands of tattered Philippine flags collected by the city government. —CLIFFORD NUÑEZ

IMUS CITY, Cavite, Philippines — By sundown on June 11, thousands of torn and faded Philippine flags stored by the city over the years will be burned in solemn “cremation” rites called “huling pahimakas” (last farewell).

The ashes of the flags will be placed in an urn, which will be buried in a grave for flags at the city’s Heritage Park in historic Barangay Alapan.

Patriotic songs will be sung and a woman representing “Inang Laya,” (Mother Freedom) will oversee the burial.

Jay Saquilayan, the city tourism and information officer, said it would be the first time for Imus to observe the “Huling Parangal sa Watawat ng Pilipinas” (Final Honors for the Philippine Flag.)

He said the city planned to hold the rites yearly in accordance with the Flag and Heraldic Code of the Philippines, which says that wornout flags “shall not be thrown away” but “shall be solemnly burned to avoid misuse or desecration.”

No simple act of burning

“It’s a flag cremation though not just a simple cremation or burning,” Saquilayan said in a phone interview on Tuesday.

The city has collected and stored thousands of wornout flags over the years since it started the Wagayway Festival in 2008.

“Some flags got torn by strong winds or had faded under the rapidly changing weather. We just folded and kept them that they have now filled up almost half of our bodega (storage room),” Saquilayan said.

The Wagayway Festival, locally called Banderada (parade of flags), which sometimes lasts a week or a month, is held in time for National Flag Day on May 28, which marks the Battle of Alapan on that day in 1898.

The Filipino revolutionaries won their first victory against the Spanish forces at Alapan, where they also took 270 prisoners. It was where Emilio Aguinaldo, the revolutionary President, first displayed the Philippine flag.

To commemorate this battle, Aguinaldo introduced the Banderada in 1950, but the yearly festival waned in the early 1980s. It was revived in 2007 by then Imus Mayor Emmanuel Maliksi.

In past celebrations, eight women, representing Nueva Ecija, Pampanga, Bataan, Manila, Cavite, Bulacan, Batangas and Laguna — the provinces that first rose against the Spaniards and symbolized by the flag’s eight rays of the sun — carried the Philippine flag until they reached Alapan Elementary School.

In recent years, the city government held the Banderada around the plaza, the highlight of its monthlong or weeklong activities, which include bazaars and fun runs.

It still features the eight women carrying a 6-meter-by-12-meter Philippine flag. Ten others also carry the 10 different flags of the Katipunan in the parade.

During this time, flags of varying sizes are hoisted or displayed in schools, government offices, private homes and public roads.

P1M a year for flags

Saquilayan said the city government would spend about P1 million each year to purchase about 5,400 flags from the same company in Santa Cruz, Manila, which supplies the flags to the National Historical Commission of the Philippines.

At the 5-hectare Heritage Park, said to be the site of the 1898 battle, the city government also erected the 35.05-meter-tall flagpole that originally stood in front of the Rizal Monument at Luneta in Manila, and a 1.2-meter brass and granite Inang Laya sculpture.

“We initially wanted it to become a national flag columbarium but thought it might be too costly for other LGUs (local government units) to bring and bury their flags here. Others do it (flag cremation) in their own [areas],” Saquilayan said.