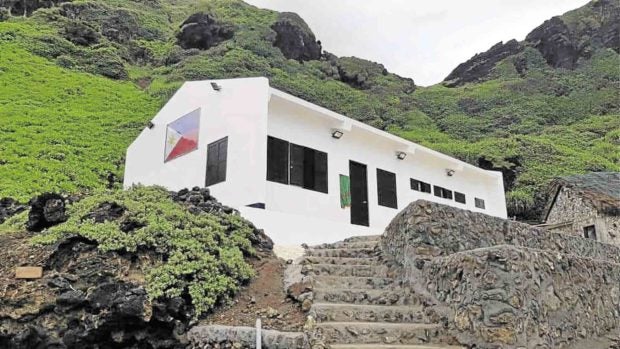 NORTHERN OUTPOST It has a view of the beach and comes with a kitchen, dining area and living room, but this solar-powered concrete structure will serve as a shelter for soldiers and fishermen who will guard the country’s northernmost fishing grounds against intruders and poachers. —CONTRIBUTED PHOTO

The Armed Forces of the Philippines handed over the shelter, along with fish dryers, to officials of Batanes province on Monday, about a year after construction began.

“We know that the area is being frequented by poachers from Taiwan and neighboring areas so this [shelter] will be a deterrent [to intrusions],” Maj. Ericson Bulosan, Northern Luzon Command (Nolcom) public information officer, told the Inquirer.

Bulosan said 20 villagers had been trained as militiamen to help the Navy and the Coast Guard monitor the shores and the waters in the area.

Poaching and illegal fishing are destroying the rich fishing grounds and threaten the area’s marine resources, said Victor Gonzales, the head of the group based in Itbayat town.

The uninhabited island, a rocky volcanic outcrop about two kilometers long and one kilometer wide, is closer to the southern tip of Taiwan, about 150 kilometers northwest of Mavulis, than to the northern part of mainland Luzon, about 280 kilometers to the south.

Fishermen and soldiers who guard the island against foreign intruders now have a safe refuge, especially during bad weather, Bulosan said.

The solar-powered one-story shelter built above a white sand beach can accommodate 16 people. It has a dining area, a kitchen and a living room. The concrete fish drying areas could serve as helipads.

In June 2017, the Coast Guard installed a solar-powered lighthouse on the island.

The shelter aims primarily to “optimize our maritime entitlements within our country’s sovereign territory” in its northernmost region, Salamat said.

It “would greatly benefit our fishermen as well as provide maritime protection for our internal waters,” he said, adding that its construction was “another significant milestone for our country and the Filipino people.”

David said the “Mavulis Project” manifested “our commitment in protecting our sovereignty and asserting our ownership in this territory.”—With reports from Jeannette I. Andrade and Villamor Visaya Jr.