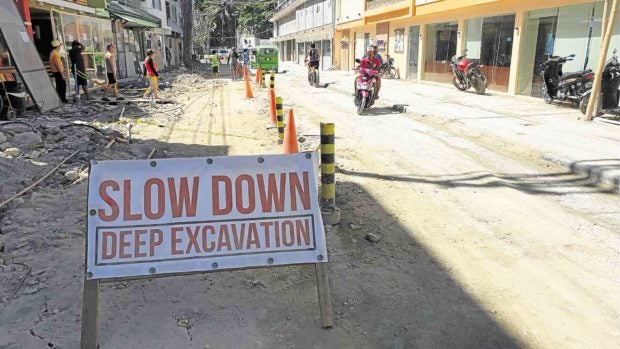 ROADWORK Road construction and drainage system upgrade are ongoing along portions of the main road in Boracay, more than six months after the resort island in Aklan province reopened to tourists. —NESTOR P. BURGOS JR.

MANILA, Philippines — Despite the flooding in some areas in Boracay over the weekend, the Department of Environment and Natural Resources (DENR) assured that it was on track in completing infrastructure work in the resort island in line with the massive rehabilitation program that the agency launched last year.

“We have already completed 90 percent of the work in Boracay, so there are still some areas where work needs to be done,” Antiporda said in a telephone interview on Monday night. “But rest assured that the quality of our work there is adequate.”

He said orders had already been issued to address the flooding, particularly near the D’Mall commercial complex and Ambassador Hotel in Station 1.

“The area of the Ambassador [Hotel] is really low, so we are still going to construct a drainage outfall going to Wetland 2 so water will flow there,” he said.

The area near D’Mall, meanwhile, was flooded after inlets were clogged by silt and other materials from an ongoing construction of speed tables, or flat-topped speed humps.

“Basically everything is going as planned, but there are some issues that we still need to address,” Antiporda said.

Boracay residents were displeased after several sections of the resort island were inundated over the weekend, raising questions on the state of its rehabilitation. The six-month closure and cleanup of the island has been the oft-mentioned source of pride of the Duterte administration, which it claimed showcased the government’s political will and care for the environment.

But the shutdown of the island, once described by President Duterte as a “cesspool,” had also adversely affected thousands of workers and residents dependent on tourism, while questions on the overall plan for the island had also been raised. —Jhessset O. Enano