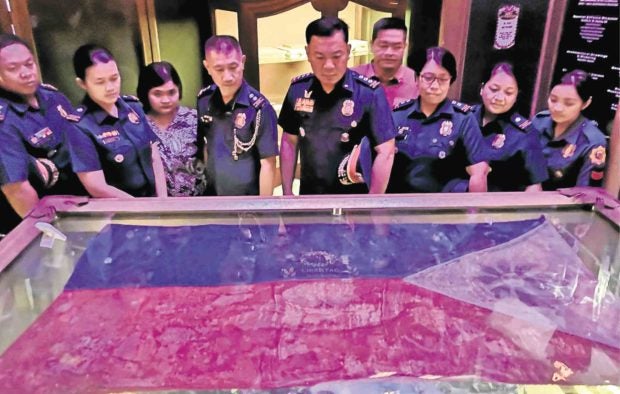 PRECIOUS RELIC The Aguinaldo family’s most precious treasure, the original Philippine flag raised in Cavite province in 1898 to mark the country’s independence from Spain, is kept at Gen. Emilio Aguinaldo Museum in Baguio City. —EV ESPIRITU

BAGUIO CITY, BENGUET, Philippines — Although made in Hong Kong (now a part of China), what is arguably the country’s first flag remains the symbol of Filipinos’ defiance against two colonial powers, the great-grandson of Gen. Emilio Aguinaldo said on Tuesday, National Flag Day.

Emilio Aguinaldo Suntay III opened the family museum in Baguio that has been preserving the badly deteriorating flag, which features a face stitched into the sun symbol and the words “Libertad” and “Justicia” sewed with gold thread on one side.

The phrase “Fuerzas Expedicionarias del Norte de Luzon” runs along the other side of the relic, which has been encased in a light and humidity-controlled room after experts found an irreparable tear in 2012.

Every time people are invited to view the fragile flag, “maybe a second, maybe a minute of its remaining life span is gone,” Suntay said.

But the family opted to popularize the flag because keeping it away from the public would also erase it from memory, he said when he addressed city employees during a Flag Day program at the museum compound here.

The flag that was hoisted in Kawit, Cavite, on June 12, 1898, when the country proclaimed its independence from Spain, was found under Aguinaldo’s deathbed in 1964.

It has been under the custody of the family of Aguinaldo’s youngest daughter and Suntay’s grandmother, Cristina.

The flag that was “made in China (Suntay asked: ‘Was it not sewed in Hong Kong?’) … transcends politics and religion, and remains the enduring symbol of Filipinos uniting against foreign aggression,” Aguinaldo’s great-grandson said.

One of the murals kept at the museum portrays how Marcela Agoncillo fashioned together the silk flag at Morrison Hill in Hong Kong, with the help of her daughter, Lorenza, and Jose Rizal’s niece, Delfina Herbosa. They were guided by a sketch drawn by Aguinaldo.

Aguinaldo sailed back to the country with the flag on May 19, 1898, and raised it at Kawit on June 12, 1898, and again when the revolutionaries assembled for the Malolos Congress in Bulacan province in 1899.

Suntay said the country drew respect from the international community toward the end of the 19th century because Spain and the United States were challenged by Filipino revolutionaries.

However, the supposed first flag never obtained official government recognition due to historical accounts that said Aguinaldo had lost his “favored battle banner” during the Filipino-American war, according to Suntay.

“After the flag was brought down from Isabela province [following Aguinaldo’s surrender in 1901], it was hidden for 20 years by the general. He claimed it was lost in a cave … At that time, America had barred the raising of the Philippine flag,” Suntay said.

The flag was kept hidden throughout martial law by Suntay’s grandmother.

“My family did not want it to fall in the wrong hands and we really wanted to preserve it,” he said.