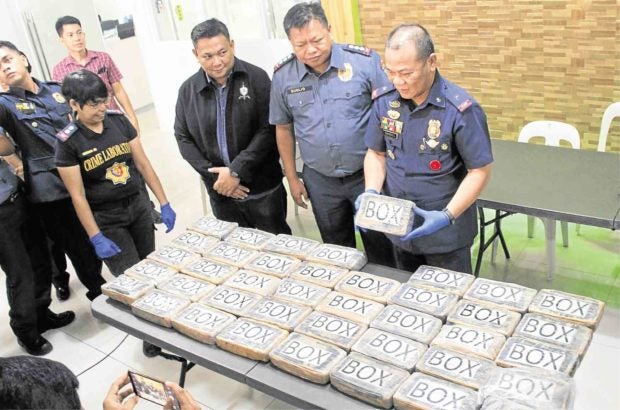 On Tuesday morning, tests done by the regional police’s crime laboratory confirmed that the recovered items, weighing a total of 39 kilograms, were indeed cocaine.

“This is so far the biggest cocaine haul recovered in Bicol,” Escobal told reporters here on Tuesday.

He said Monday’s find brought the total number of blocks of cocaine found in Bicol since February last year to 50 kg, worth about P280 million.

Cocaine, packed in tape and plastic boxes, were also fished out of the waters off Vinzons and Paracale towns in Camarines Norte province and Baras and Bagamanoc towns in Catanduanes province.

Despite these discoveries, Escobal said the police could not say that Bicol was a “hotbed” of illegal drug operations, noting they had no reports or intelligence information to support such conclusion.

Rogelito Daculla, acting assistant director of the Philippine Drug Enforcement Agency (PDEA) in the region, said they were checking if the cocaine from the three provinces came from a single source.

“Drug profiling process takes a while since we have limited capabilities in knowing the chemistry, the quality of the drugs and where these were produced,” he said.

Daculla said the drug samples would be submitted to the Australian Federal Police and the US Drug Enforcement Administration for testing.

In an earlier interview, Christian Frivaldo, acting PDEA director in Bicol, said the agency was looking at Mexico and Colombia as possible sources of the blocks of illegal drugs found in the region. —Mar S. Arguelles