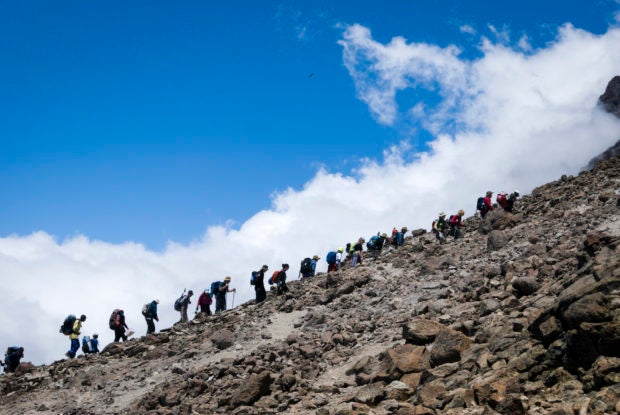 A group of trekkers negotiating a steep slope of loose scree and barren alpine terrain on a bright day during the climb up Mt Kilimanjaro in Tanzania. Image: iStock/lupideloop via AFP Relaxnews

An online petition was launched to protest the potential building of a cable car on Mount Kilimanjaro.

The cable car would be aimed primarily at facilitating visits among older tourists, who may not be physically fit enough to climb the mountain which stands 5,895 meters tall at its peak.

But the reaction has been swift, with at least one online petition pointing out the economic impact to local porters who rely on tourist activity for their income.

It was estimated that 50,000 tourists climb the mountain every year.

“The introduction of a cable car on the mountain that would no longer require the assistance of porters would destroy this source of income,” Mark Gale said, who launched the petition on Change.org.

Gale also pointed out that the oldest person to hike Kilimanjaro was 86-years-old and that the mountain is well within the capabilities of “older” visitors.

“I climbed last month at 53 years old and it was an amazing experience putting one foot in front of the other and living on the mountain, there is no thrill in taking a taxi to the top of a mountain.”

The government is currently conducting feasibility studies on the environmental and economic impact of a cable car. HM/JB

To save his school, refugee-amputee climbs Mount Everest