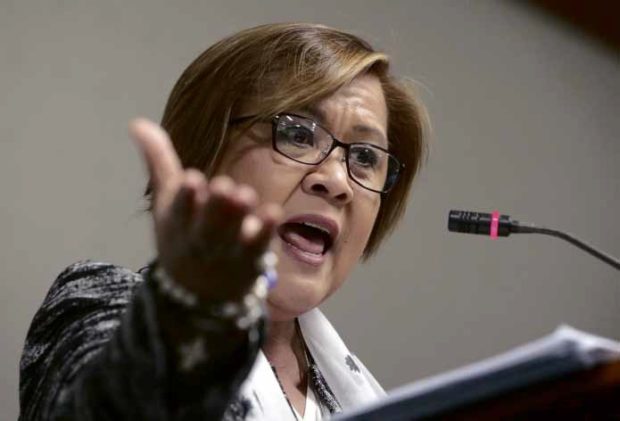 SUMMARY KILLINGS Sen. Leila de Lima says the manner of executions is the same but the killings are done in a different place.

MANILA, Philippines — Central Luzon, regarded as the Philippines’ “rice granary” for producing the bulk of the nation’s staple, has become the country’s “new killing fields” with a spike in killings in President Rodrigo Duterte’s brutal war on drugs, according to detained Sen. Leila de Lima.

De Lima on Monday filed a resolution in the Senate seeking a public inquiry into the sudden bump in the number of drug suspects slain in police operations in the region, which, she claimed, accounted for nearly 30 percent of the total drug war deaths in the country last year.

The PNP “welcomes the proposed Senate inquiry,” said Col. Bernard Banac, spokesperson for the PNP, when asked for comment.

“The PNP is on top of the situation and the peace and order situation in the region remains under control,” Banac said.

In Senate Resolution No. 1041, De Lima said “Congress, through relevant and appropriate legislation, must end the perpetration of the culture of impunity by facilitating the enforcement of the full extent of the law against persons, both state and nonstate actors, responsible for summary killings,” the senator said.

“The manner of executions reflects the killings made here in Metro Manila, the difference being the drug operations are committed in another area with new victims,” she said.

“The past year, various news reports show that while Metro Manila has registered a reduction [in] the number of deaths in their drug-related operations, nearby provinces and regions have recorded more than one death a day, specifically Central Luzon, and that it has become the new focus of the war on drugs,” she added.

De Lima, whose stinging criticism of the President’s war on drugs landed her in jail, noted that while Central Luzon topped the number of drug killings in 2018, policemen in the region did not fare well in seizing illegal drugs.

She said policemen in Central Luzon recovered only 11.98 kilos of “shabu” (crystal meth), or less than 10 percent of the 143.85 kilos seized by police in Metro Manila last year.

Said De Lima: “It is urgent to investigate this apparent shift of focus to Central Luzon and to assess the strategy pursued by the administration’s drug war.”

She said it was also interesting that certain police officials formerly assigned in Metro Manila were recently assigned to Central Luzon, among them Police Col. Chito Bersaluna, the Bulacan police director, who headed the Caloocan City police when 17-year-old Kian delos Santos was killed by policemen in 2017.

De Lima, who has been detained in Camp Crame since 2017 on what she claims are trumped-up drug trafficking charges, wanted to know if policemen were using the drug war and their official designation to justify human rights abuses and other unlawful acts.

“It is also imperative to look into the factual and legal issues relating to these killings and determine whether these killings were products of legitimate police operations, the rights of suspects or persons subject of operations have been observed, and existing procedures on arrest, seizure and arrest have been complied with,” De Lima said.—With a report from Jaymee T. Gamil