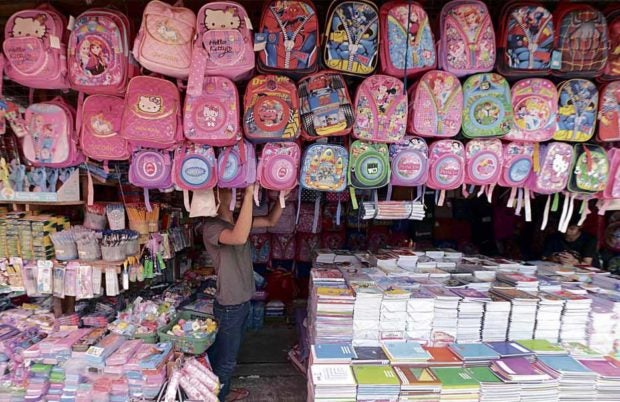 SCHOOL NEEDS A stall keeper sells school bags and other supplies at Commonwealth Market in Quezon City. Education authorities expect a smooth opening of classes all over the country on Monday despite criticisms of severe classroom and teacher shortages on the ground by the Alliance of Concerned Teachers. —GRIG C. MONTEGRANDE

MANILA, Philippines — As the Department of Education (DepEd) projected confidence on Monday in its preparedness for the opening of the school year on June 3, a teachers’ group assailed what it called “severe shortages” that would force the holding of some classes in erstwhile comfort rooms.

In a statement, the Alliance of Concerned Teachers (ACT) said it had received nationwide reports of “age-old problems,” including in the Central Visayas and Davao regions, where teachers reported of classes that would be held under trees, on staircases and even in onetime comfort rooms.

“In Caraga region, every year level has a one-day holiday every week due to insufficient spaces to hold classes,” said Raymond Basilio, ACT secretary general, of Agusan National High School in Butuan City.

“This is the appalling reality at the school level,” Basilio said. “Their environment is not at all conducive to learning and to productivity.”

During the launch of the interagency “Oplan Balik Eskwela” (OBE) on Monday, officials said current facilities were prepared to handle this year’s 27.8 million students. There were, however, 66,050 additional classrooms still expected to be turned over before the end of 2019.

The funding for some of these rooms was from as far back as 2014, said Undersecretary for Finance Annalyn Sevilla. The DepEd had “found ways to intervene and mitigate” the effects of not having these rooms in the meantime, she added.

The Department of Public Works and Highways said 62 percent of funded classrooms had already been completed.

The record number of students—almost 3 percent higher than the 27 million in 2018—reflected a surge of enrollees nearly across the board, from elementary to junior and senior high school. Only kindergarten enrollees decreased, based on initial data, by 79,683 students.

According to DepEd projections, the biggest increase of all basic education levels was in junior high school, or Grades 7 to 10, which will see 206,428 new students this year.

Sevilla also said there would be 33,000 teaching positions to be filled over the coming school year—23,000 currently vacant positions and 10,000 new positions that were approved by the Department of Budget and Management.

Undersecretary for Planning Jesus Mateo said he anticipated the positions, the majority of which were in the Bangsamoro Autonomous Region in Muslim Mindanao, would fill up quickly.

The Professional Regulation Commission announced this week that 41,930 examinees had passed the March 2019 Licensure Exam for Teachers, providing DepEd a potentially large pool of applicants.

The OBE Interagency Task Force charged with ensuring a smooth opening on Monday is composed of 13 public and private agencies, including the Philippine National Police, Department of Trade and Industry (DTI) and Philippine Atmospheric, Geophysical and Astronomical Services Administration (Pagasa).

“The idea here is that education is not just the responsibility of the DepEd,” said Education Secretary Leonor Briones. “All of our government agencies, including the private sector, are helping one another to prepare.”

The PNP said it would deploy 150,000 personnel nationwide and 6,000 in Metro Manila alone to “prevent and suppress the occurrence of criminal and terroristic incidents.” The DTI meanwhile has conducted weekly monitoring of the prices of school supplies.

Pagasa said it would keep parents and students updated over the next week about possible storms, the majority of which are typically concentrated in Luzon and the Visayas during June.

A Public Assistance Command Center was also established at the DepEd headquarters in Pasig City, where staff will be situated until June 7 to address any queries or concerns from the public.