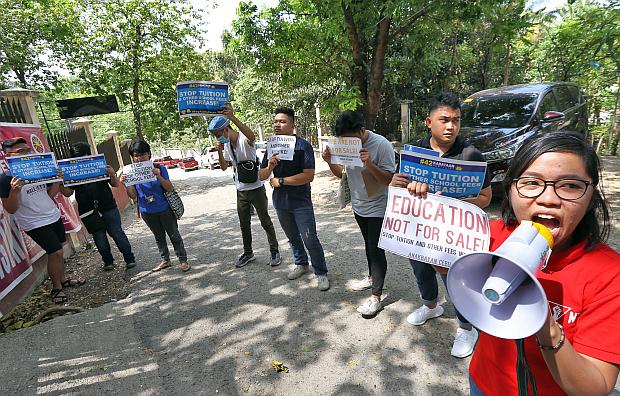 Dyan Gumanao, coordinator of National Union of Students in the Philippines (NUSP) in Cebu, lead protest rally against a planned tuition hike of private schools in Central Visayas in front of the CHED office in Cebu City. (Photo by JUNJIE MENDOZA / Inquirer Visayas)

CEBU CITY, Philippines — Around 50 percent of all private grade schools and high schools in Central Visayas are expected to raise their tuition and other fees this coming school year, according to Amaryllis Villarmia, spokesperson of the Department of Education in Central Visayas (DepEd 7).

According to Villarmia, some schools are still processing their requirements before their application for fee increases this could be processed.

So far, as of last week, only one school — in Bais City, Negros Oriental — has been given the DepEd confirmation. The Bais school will increase its tuition and other fees by 4 to 6 percent.

Other schools have not yet applied for DepEd approval, while some still lack the requirements.

The DepEd spokesperson said that most of these private schools would be opening classes in July or August. So most of them were still processing their papers.

Under DepEd rules, 70 percent of the increase in tuition and other fees should be set aside for the salaries and other benefits of teachers; 20 percent for infrastructure, equipment, and learning resources of the school; and only 10 percent for the profit of the school.

“Even before the K-12 existed, there were already increases in tuition and other school fees,” she said.

On Thursday, at least 10 student leaders in Cebu City held a protest rally in front of the Commission on Higher in Central Visayas (CHEd 7) as the agency was holding its Regional Multi-sectoral Committee meeting on tuition and other fee increases.

Dyan Gumanao, the coordinator of National Union of Students in the Philippines (NUSP) in Cebu, said there are at least three to five universities in Cebu now planning to have a tuition fee increase.

“There are schools that have already submitted their proposal to increase their tuition and other fees for the academic year 2019-2020,” Gumanao, speaking in Cebuano, said.

She said that the meeting held on Monday by the multi-sectoral committee would determine which applications would be recommended for approval to the CHEd.

“This will have a big effect on the students if the tuition increase will push through. Until now the prices of basic goods are still increasing and the wage here in Cebu is still low,” she added.

Gumanao said that there were already universities here in Cebu City that had increased their tuition without giving students prior notice.

On Monday, student leaders belonging to various organizations again trooped to the CHEd 7 office to voice out their objection to the planned fee increases.