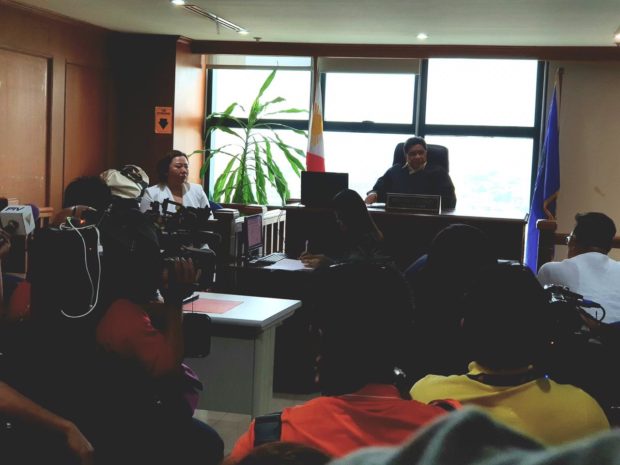 MANILA, Philippines — The Makati City Regional Trial Court Branch 150 has resumed the trial of the rebellion case of Sen. Antonio Trillanes IV that it dismissed eight years ago.

On the first day of the trial, the prosecution presented as witness Assistant State Prosecutor Mary Jane Sytat, who was present in court when Trillanes and his military colleagues walked out and went to the Manila Peninsula.

[There is no materiality to her testimony. They said they are having difficulty securing other witnesses. So for this hearing not to go to waste, they presented her.]

After Sytat’s direct testimony, Robles opted to defer his cross-examination for the next hearing on July 22 because Sytat was not included in the original list of witnesses and her affidavit was not among the documents given to them.

[I think she was just a filler so it would not be said they did not have an available witness.]

Contrary to Robles’ claim, Sytat said they had witnesses. But she was first on the list because they were following a timeline of events — from the start of the Manila Peninsula siege in a courtroom in Makati where Trillanes’ coup d’etat case was heard.

“The rebellion will not just start there [Manila Peninsula]. The court needs to know the events that transpired before the siege,” Sytat explained in a phone interview.

“Nobody listed could testify what happened in the courtroom. Ako talaga yung intended witness, not a filler,” she said, adding that the affidavit mentioned was not hers alone but a joint one made with three other prosecutors.

After Trillanes was given amnesty in 2011 by then President Benigno Aquino III, the prosecution no longer opposed the dismissal of the case.

However, the amnesty was revoked by President Rodrigo Duterte for Trillanes’ alleged failure to comply with the requirements of submitting an application form and admitting his guilt.

The trial will resume on July 22.