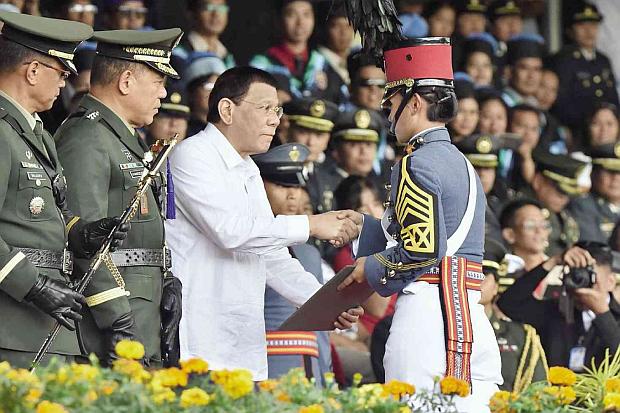 The cadets went into formation at 8:30 a.m. at Borromeo Field and did squad drills while waiting for the President. They stopped when the presidential motorcade finally arrived at 10:55 a.m.

The President begged off from the traditional arrival honors, which would have required him to march from the PMA sundial to the grandstand — a distance of 100 meters.

The graduation ceremony proceeded as soon as the President took his seat alongside Vice President Leni Robredo and Defense Secretary Delfin Lorenzana.

No official explanation was given by the PMA or Malacañang for the delay.

Many PMA officials appeared concerned when a seemingly wobbly President almost fell while boarding a military jeep, called the “white carabao,” for the traditional trooping-the-line ceremony.

When the President stood up to hand out diplomas, he sat back again after giving the diploma to newly commissioned Navy Ensign Dionne Mae Umalla, the class valedictorian.

As commander-in-chief, the President is tasked with handing out the diplomas. Lorenzana took over the task.

The President stood up again to acknowledge the class “goat,” Danmark Solomon.

“Secretary Lorenzana is the next in rank, so he took on the task [but] we do not know why,” said Maj. Reynan Afan, PMA spokesperson.

Read Next
Watch out for rain on Sunday
EDITORS' PICK
Smart, TNT launch more powerful and value-packed Double GIGA+ 50 offer
Pagasa: No tropical cyclone expected in the next few days
House energy committee chair Arroyo bats for cheap electricity
NDRRMC confers posthumous award on 5 fallen Bulacan rescuers
Having confidential funds not a DepEd norm – Pimentel
Motorcycles, smartphones, and cash prizes up for grabs in TNT’s ‘Tuloy Ang Saya’ Raffle in Mindanao
MOST READ
Sharon Cuneta ‘turned away’ at Hermes boutique in Seoul, welcomed by LV
Marcos in Singapore for F1 Grand Prix – source
Having confidential funds not a DepEd norm – Pimentel
WATCH: Coleen Garcia dances with Billy Crawford in France’s ‘Dancing with the Stars’
Don't miss out on the latest news and information.