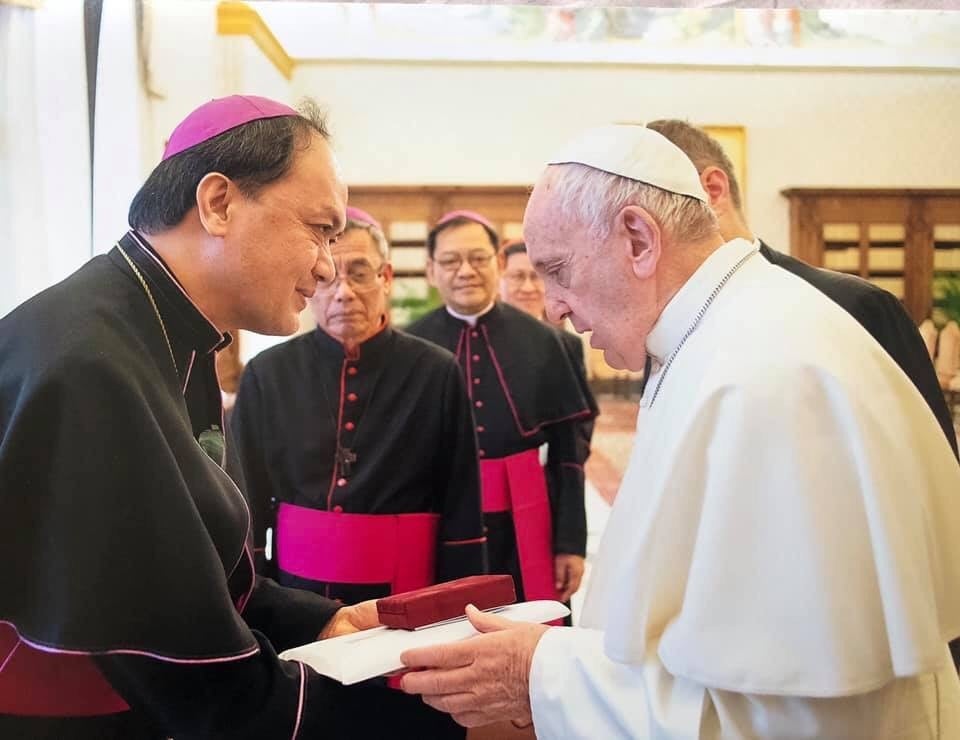 SPECIAL BLESSING Pope Francis prays over Caloocan Bishop Pablo Virgilio David, who faces trials in his diocese, during his
meeting with the Pontiff at the Vatican. —PHOTO FROM BISHOP DAVID’S FACEBOOK

Pope Francis has urged Caloocan Bishop Pablo Virgilio David, who has drawn the ire of President Duterte, to remain courageous amid the “trials” that he is currently going through in his diocese.

David said in his Facebook post on Friday that in his recent mandatory visit to the Vatican with 31 other Filipino bishops, he received a “special blessing” from the Pope, who assured him of his support.

In their meeting with the Pontiff, David said he was cut off by Francis when he asked for his prayers.

“I want you to know that I know your situation. I know what you are going through. I am praying for you,” David quoted the Pope as saying, which he noted brought tears to his eyes.

Because of his vocal criticism of the Duterte administration’s bloody and brutal war on drugs, David has earned the ire of Duterte who had accused him of not only being in on the illegal narcotics trade but also of pocketing Church funds.

The prelate’s stand against the administration’s centerpiece campaign stems from the fact that his diocese—covering the cities of Caloocan, Malabon and Navotas—is where most vigilante killings and alleged police shootouts with drug suspects occur, which often targeted those in the margins of society.

David added that Pope Francis also prayed over him and hugged him before he left the meeting.

“Please let me give you a special blessing. I want you to know I am with you as you face trials in your ministry in your diocese. May the Lord keep within you the heart of the Good Shepherd. Courage!” David quoted the Pope as saying.