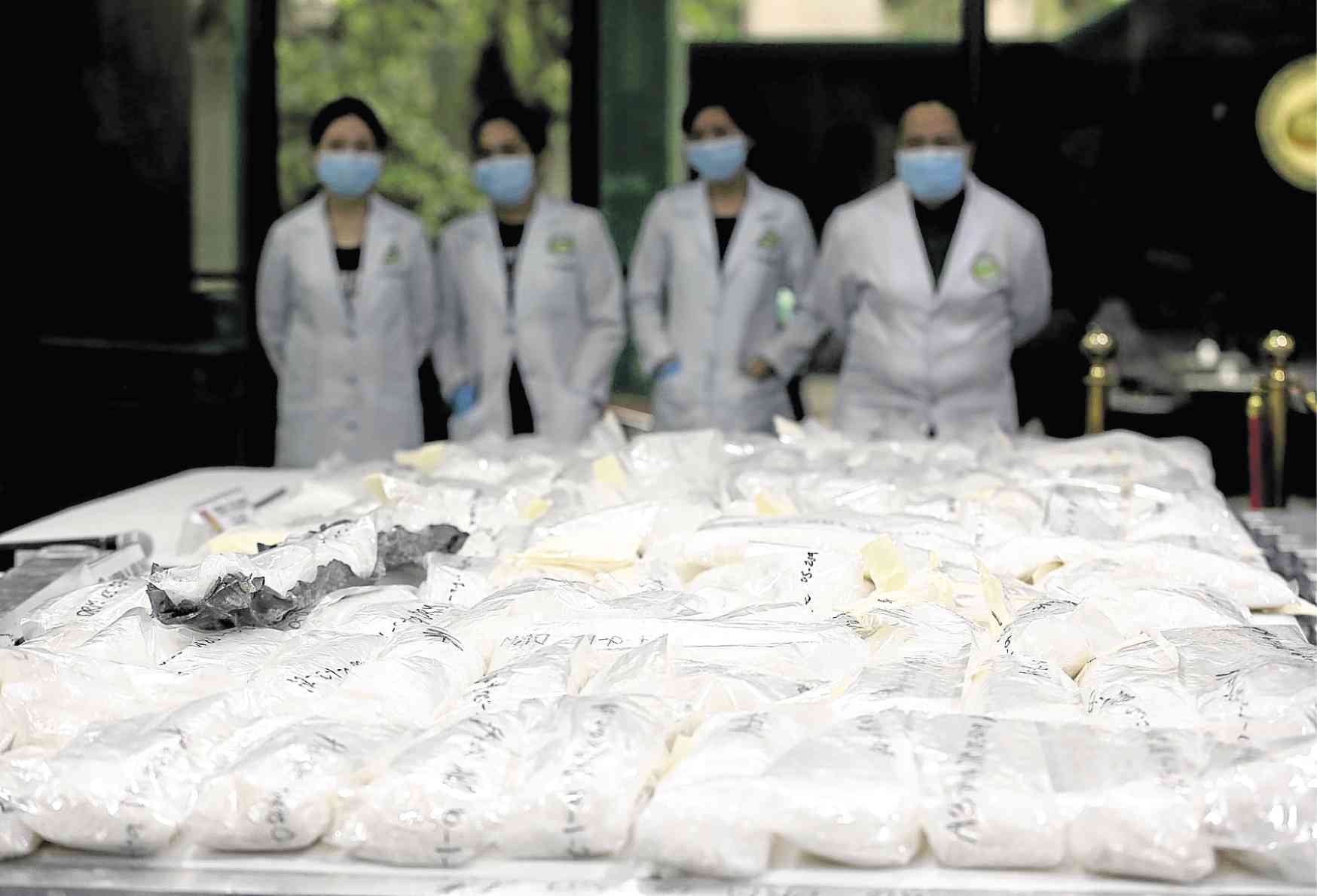 The Philippine Drug Enforcement Agency (PDEA) on Friday said it was still looking for the people behind the consignee of the P1 billion worth of “shabu” (crystal meth) hidden in a shipment of aluminum pallets and tapioca starch from Cambodia that was abandoned in March at the Bureau of Customs compound in Manila.

Officials of the PDEA and the customs bureau said agents from the two agencies were engaged in an unsuccessful two-month operation to lure Philippine-based members of the Chinese Dragon Wu syndicate, which is suspected of smuggling the drugs into the country, into claiming the shipment.

The Chinese group has ties to the notorious Golden Triangle syndicate, according to Director General Aaron Aquino, the PDEA chief.

Aquino said agents laid a trap by auctioning the abandoned containers filled with tapioca starch and aluminum pallets, which contained 146 kilograms of shabu packed in 114 bags.

But the trap failed as the winning bidder in the April 22 auction, Goldwin Commercial Warehouse, turned out to be unaware that the shipment was actually just a front for the smuggled drugs, Aquino said at a press conference at the PDEA headquarters in Quezon City on Friday.

Aquino said the company was “clean” and cleared it of involvement in the smuggling.

The PDEA collected the shabu from Goldwin’s warehouse in Malabon City on Thursday and presented the drugs to reporters on Friday.

Aquino said the shipment’s actual consignee was Goroyam Trading, a company based in Cavite province, but the people behind the enterprise had not been identified.

“Once we find them, they would probably be the link [to the smuggled drugs],” he said.

The shipment may have been abandoned by the syndicate after learning that drug enforcement agents were lying in wait for it, Aquino added.

The PDEA learned about the shipment from the mobile phone logs of Alexander Jun Wah Ting Lee and Patrick John Gankee, two Chinese arrested in an antidrug operation on Feb. 13 in Dasmariñas City, Cavite.

Agents confiscated 36 kg of shabu worth P244 million from Lee and Gankee.

Aquino said the Dasmariñas City operation was an offshoot of a Feb. 3 raid by agents of the PDEA and the Intelligence Service of the Armed Forces of the Philippines on a “repacking center” in Tanza, Cavite, where 274 kg of shabu worth P1.9 billion were recovered from another two Chinese who were killed when they shot it out with the agents.

On March 5, customs officials located the containers, which arrived in mid-February, filled with sacks of tapioca starch, though Aquino said it took agents several days to find the drugs because these were hidden in the aluminum pallets in the same shipment.

Aquino said the PDEA would coordinate with the agency’s Cambodian counterparts to find out who sent the shipment to the Philippines.

The PDEA has confiscated billions of pesos worth of smuggled illegal drugs since 2016, when President Duterte took office and promised to stamp out the country’s narcotics problem in the first six months of his presidency.

On May 26, 2017, acting on a tip from their Chinese counterparts, agents from the customs bureau’s Intelligence and Investigation Service raided warehouses at Barangays Paso de Blas and Ugong in Valenzuela City and seized 605 kg of high-grade shabu worth P6.4 billion.

The drugs, which entered the country through the bureau’s “express lane” on May 23, were packed in plastic bags hidden inside five metal insulators used in printing presses.

During a Senate inquiry into the drug smuggling, Sen. Antonio Trillanes IV accused the “Davao Group” of facilitating the entry of the illegal drugs into the country.

In August 2018, PDEA and customs agents found 500 kg of shabu worth P4.3 billion hidden in a shipment of two magnetic lifters that arrived in July at the Manila International Container Terminal (MICT).

But a second shipment of magnetic lifters slipped past customs and was believed to have contained 1 ton of shabu worth P6.8 billion, according to the PDEA.

Agents later found the empty magnetic lifters in a warehouse in General Mariano Alvarez town in Cavite the next day.

On March 22, authorities confiscated an estimated P1.8 billion worth of shabu at MICT. The PDEA said the drugs were shipped into the country by a Chinese syndicate.

Acting on information provided by the PDEA’s Vietnamese counterpart, agents intercepted the shipment of 276 kg of shabu stuffed in tea packs. —WITH A REPORT FROM INQUIRER RESEARCH