Malabon warehouse yields 146 kilos of ‘shabu’ worth around P1B 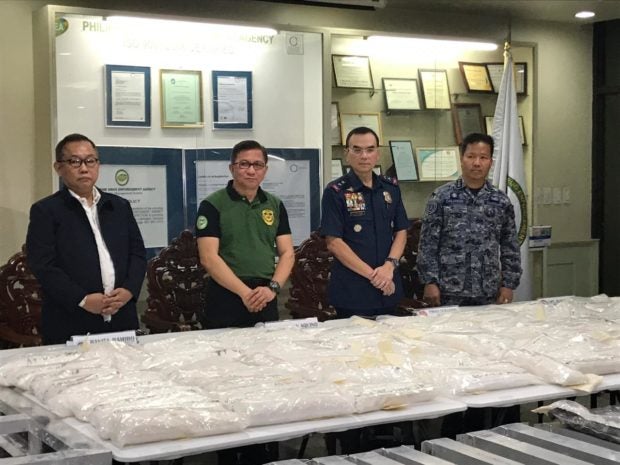 MANILA, Philippines — A total of 146 kilos of “shabu” (crystal meth) worth around P1 billion were seized inside a warehouse in Malabon City on Wednesday, authorities said Friday.

The Philippine Drug Enforcement Agency (PDEA) said that operatives of several enforcement agencies retrieved the shabu from a warehouse in Brgy. Santolan in Malabon City.

The illegal drugs were concealed in 114 bags and kept inside several aluminum pallets. The shipment was marked as tapioca, the agency said.

PDEA Director General Aaron Aquino said the illegal drugs were shipped from Cambodia and consigned to a certain company called Goroyam Trading, which is reportedly located in Cavite.

Aquino said the PDEA, in coordination with the Bureau of Customs (BOC), found the abandoned shipment in March.

However, in hopes of finding and arresting the people behind the shipment, which are allegedly part of the Golden Triangle drug syndicate, the PDEA decided to auction off the “tapioca shipment.”

This is in the hopes that members of the drug syndicate would participate in the auction, Aquino said.

Coordinating with the BOC, the auction took place in April and a certain company called Goldwin Commercial Warehouse won the highest bid.

However, Aquino said that upon conducting a background check on the owners of the company, the PDEA found no link between the company and illegal drug trade.