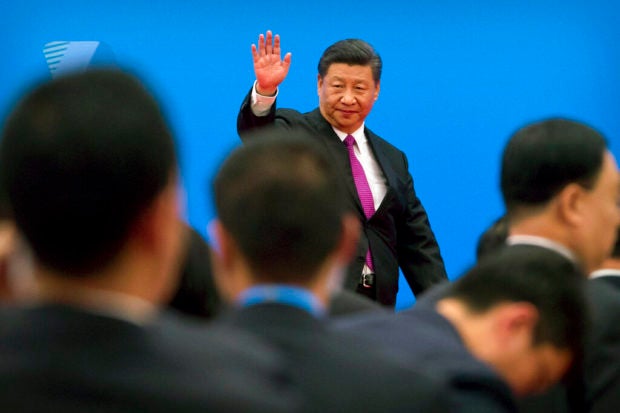 In this April 27, 2019 file photo, Chinese President Xi Jinping waves as he leaves after a news conference on the outskirts of Beijing. AP

BEIJING — China held the door open to resuming talks in the tariff war with Washington on Thursday, but lashed out at limits on access to key technologies that it said might hurt global supply chains.

Foreign Ministry spokesman Lu Kang said China hopes to restart the talks that broke down earlier this month after the US hiked tariffs on $250 billion in Chinese imports, but only if the conditions are deemed fair.

“China is open to the door of dialogue, but sincerity is indispensable to make a consultation meaningful,” Lu said at regularly scheduled briefing. “A mutually beneficial agreement must be based on mutual respect, equality and mutual benefit.”

The world’s two largest economies have been in a standoff since last year, when the Trump administration announced it was enacting sweeping tariffs on Chinese goods as it sought to shrink the US trade deficit and prompt Beijing to address accusations that it unfairly forces American companies operating in the country to hand over technology to local partners. China responded with tariffs of its own.

The dispute has roiled global financial markets, which have dipped as tensions worsened and jumped at any hint of a breakthrough.

Seeking to rally support for its side in the tariff war, Beijing is vehemently protesting the Trump administration’s decision last week to impose controls on exports of computer chips and other key components.

The move, mainly aimed at telecom equipment maker Huawei and other Chinese high-tech companies, will hinder global cooperation in science and technology and has “harmed the vital interests of relevant enterprises and countries,” Lu said.

This “not only seriously disrupts regular business cooperation between the sides’ enterprises, but also seriously threatens the security of the global industrial supply chain,” the spokesman, Gao Feng, told reporters.

The Trump administration has singled out Huawei, accusing it of posing a security threat. As a result, US allies and their companies increasingly have put cooperation with the company on hold.

On Wednesday, Britain’s EE and Vodafone and Japan’s KDDI and Y! Mobile said they were holding off on the launch of Huawei smartphones, including some that can be used on next generation mobile networks, amid uncertainty about the devices from the world’s No. 2 smartphone maker.

As the trade dispute drags on, battering Chinese manufacturers and raising uncertainty for investors, Beijing has stepped up efforts to sway opinion in its favor both at home and abroad.

That extends even to neighboring countries whose economies are unlikely to be much affected by friction between Beijing and Washington.

Speaking to members of the eight-nation Shanghai Cooperation Organization at a meeting in Kyrgyzstan, Chinese Foreign Minister Wang Yi vowed to match “extreme pressure” from the U.S. with its own measures.

The trade frictions have “aroused great concern from the international community,” Wang said. “I stress to everyone that China’s actions are not just about preserving our own legitimate rights and interests but also to maintain the norms of international relations and safeguard the international free trading system.”

Wang, whose comments Wednesday were posted on the Foreign Ministry’s website, said representatives of the group had expressed “broad support” for China’s position.

Beijing has already responded to Trump’s tariff hikes on $250 billion of Chinese imports by slapping penalties on $110 billion of American goods. Based on last year’s trade, that leaves about $45 billion in imports from the US.

They include semiconductors and other critical inputs needed by fledgling Chinese tech industries.
So far, Beijing has sought to win sympathy and support by burnishing its credentials as a rules-abiding member of the World Trade Organization.

China has hinted it could also leverage its role as the main global supplier of rare earths used in smartphones, lightweight magnets, batteries and other components to slap back. It could also target Apple and other companies that rely on Chinese manufacturing and sales. /ee

Read Next
‘Shabu’ worth P800K seized in QC
EDITORS' PICK
LGUs must issue fare matrix to allow tricycles to operate — DILG
Cherry Mobile teams up with Cloud Panda PH, launches online store
COOCAA TV Bounce Back Sale offers up to 50% off
Employers may monitor staff in work-from-home setup — NPC
Smart launches new LTE-Advanced Pocket WiFi Plans starting at P699 per month
Philippines’ COVID-19 cases surge to 20,626, deaths near 1,000-mark
MOST READ
Lacson to Duque: ‘Just go’
‘Ang Probinsyano,’ other ABS-CBN programs to return as new channel set to emerge
Philippines’ COVID-19 cases surge to 20,626, deaths near 1,000-mark
Duterte lambasts Trillanes anew: ‘You did nothing but glorify yourself’
Don't miss out on the latest news and information.