NATO warns Russia of ‘full range’ of responses to cyberattack 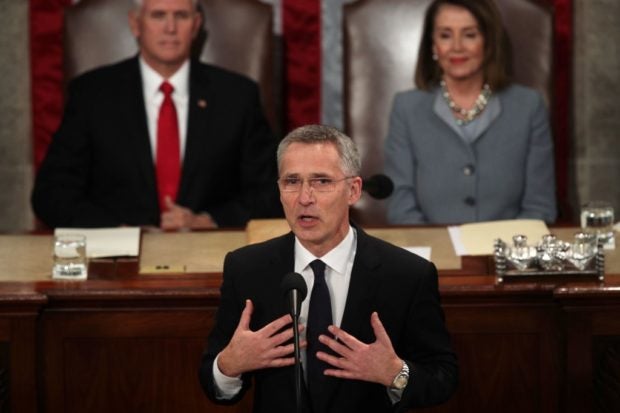 LONDON — The head of the North Atlantic Treaty Organization (NATO) told Russia and other potential foes Thursday that the Western military alliance was ready to use all means at its disposal to respond to cyberattacks.

Jens Stoltenberg’s warning came with the bloc’s members on alert for interference in European Parliament elections that kicked off in Britain and the Netherlands on Thursday.

Western allies accuse Russia of trying to sway the outcome of the 2016 US presidential vote and using cyber technology to cripple the infrastructure of rival Ukraine – charges Moscow flatly denies.

“For deterrence to have full effect, potential attackers must know we are not limited to respond in cyberspace when we are attacked in cyberspace,” Stoltenberg said during a joint press appearance in London with UK Foreign Secretary Jeremy Hunt. “We can and will use the full range of capabilities at our disposal.”

Hunt said Britain’s National Cyber Security Centre (NCSC) has shared details of malicious Russian activity with 16 of the 29 NATO members over the past 18 months.

He accused Russian “proxies” in 2014 of trying to tamper with the voting system and delaying the final results of a presidential election in Ukraine that followed the ouster of a Moscow-backed leader.

“In the cyber age, authoritarian states possess ways of undermining free societies that dictators of earlier times would have envied,” Hunt said.

“Recent events demonstrate that our adversaries regard democratic elections as a key vulnerability of an open society.”

The European Union last week adopted the power to impose “targeted restrictive measures to deter and respond to cyberattacks.”

Stoltenberg and Hunt refused to say what steps might be taken by NATO – a Cold War-era military alliance that Russia still views as a top national security threat.

“We need to balance clarity about our determination to act with constructive ambiguity about exactly what we would do in specific circumstances,” Hunt said.

He called the new EU sanctions regime just one of the potential options.

Britain said it has evidence that the attack was plotted by senior leaders in Moscow and carried out by members of Russia’s military intelligence agency.

Stoltenberg’s visit came as part of his preparations for a NATO summit London will host on December 3 to 4. /kga