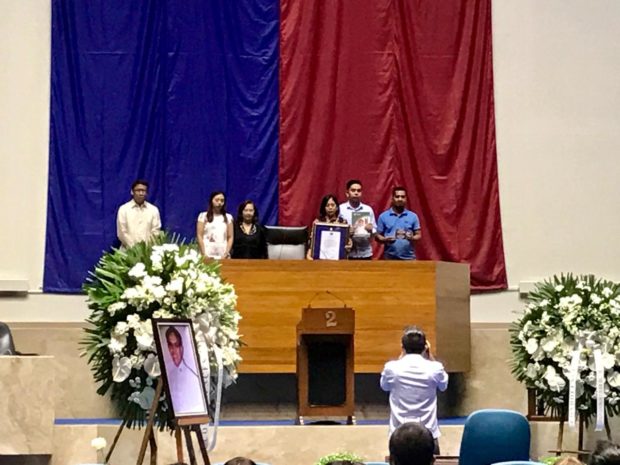 She lamented how the country lost a “committed advocate who never wavered from his cause, who fought a good fight for the poor and marginalized.”

“He, Bayan Muna and the party-lists who he was allied with demonstrated the valor, the vibrancy, and the vigor with which Philippine democracy can live and function,” the outgoing Pampanga congresswoman said.

“In fighting the good fight for progress, injustice in our land, each in our own way, we’re all bonded to him.”
In 2006, Virador was part of the so-called “Batasan 6” Makabayan legislators who were under protective custody in the House following the filing of “nonbailable, trumped up” charges of rebellion against them by then-president Arroyo, according to Makabayan bloc’s House Resolution No. 2549.

The Supreme Court eventually dismissed the case in 2007.

Zarate meanwhile called on public servants and the people to honor Virador’s legacy by continuing his advocacy of searching for justice, peace and human rights.

The human rights defender who served as representative of the progressive Bayan Muna party-list in the 13th Congress from June 2004 to June 2007, is survived by wife Imelda, son Harvey Rafael, and daughter Joanna Paula.

Joanna proudly shared her father had maintained his integrity throughout his years in public office.

Virador, who was among the founding members of Karapatan Alliance for the Advancement of People’s Rights before becoming a lawmaker, was laid to rest last Sunday.  (Editor: Gilbert S. Gaviola)

Read Next
PPCRV to continue operations despite transparency server closure
EDITORS' PICK
Nestlé Philippines’ ‘NESCAFÉ Plan’ bags Grand Anvil at PRSP 56th Anvil Awards
Smart reinforces superiority with best speed and mobile video experience in PH
Every Filipino home can now be a smart home with realme TechLife
New 3,045 COVID-19 cases push PH total active cases to 40,074
LTO’s P500-M deal for screws draws scrutiny
How to lose a PH genius: Wesley So officially a US citizen
MOST READ
How to lose a Filipino genius: Wesley So officially a US citizen
US lays out list of aid to ‘satisfy’ Duterte following VFA payment demand
Robredo on Sara Duterte leading poll surveys: Why are Filipinos drawn to leadership of this kind?
Duterte order to police, military on Reds: ‘Kill them all’
Don't miss out on the latest news and information.