NICOSIA, Cyprus – A Cypriot army captain who confessed to killing seven foreign women and girls will remain in police custody for another eight days, a court ruled on Tuesday, as investigators continue to build their case against the man who is believed to be the east Mediterranean island nation’s first serial killer.

A Nicosia district court judge said a police request to extend the 35 year-old suspect’s detention was justified because of the work that investigators need to complete. 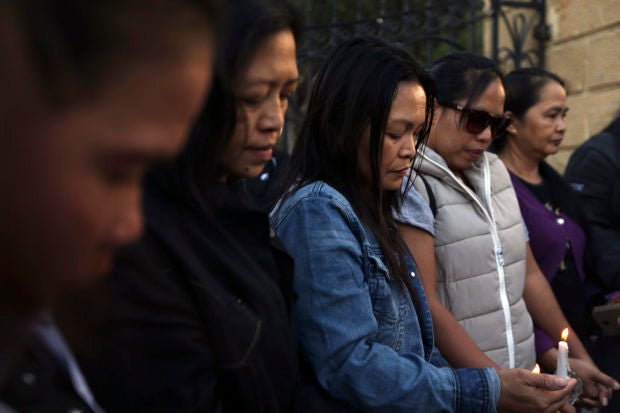 Women light candles in memory of victims outside the presidential palace in Nicosia, Cyprus, Friday, May 3, 2019. Hundreds of people turned out in front of Cyprus’ presidential palace to remember the five foreign women and 2 girls that a military officer has confessed to killing. The officer is widely acknowledged to be Cyprus’ first serial killer. (Photo by PETROS KARADJIAS / AP)

Police investigator Yiannis Georgadjis told the court that the suspect led police last week to an area outside the capital where additional, unspecified evidence relating to the case was located.

Investigators are also examining the three vehicles the suspect is believed to have used in committing the killings.

The army officer, whom police haven’t identified, confessed in a handwritten note to the killings of three Filipino women and the daughter of one of them, a Romanian mother and daughter and a woman believed to be from Nepal.

He faces charges of premeditated murder, kidnapping and the 2017 rape of a foreign woman who was 19 at the time. He denies the rape allegations.

The killings have shocked the country of just over a million people and led to the resignation of the justice minister and the firing of the police chief.