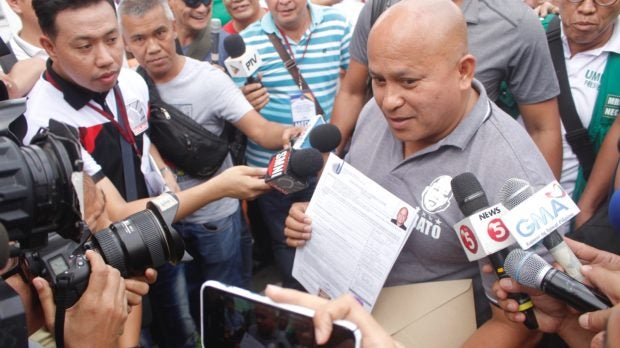 MANILA, Philippines — The legal counsel of senatorial candidate Ronald “Bato” dela Rosa urged the Commission on Elections (Comelec) on Sunday to proclaim the top six winners of the senatorial race.

According to Abdul Basar, the the certificates of canvass (COCs) from four overseas voting and two local precincts would probably no longer affect the current ranking of senators.

“Procedurally, normally, sometimes there would be a partial proclamation, as to compared to the 2013 election and 2016 election, because the votes garnered by the principal, would be impossible to be equaled by those behind,” Basar, speaking partly in Filipino, told reporters. “How many votes left for these COCs? Only a few. Maybe not even 100,000. So they should be proclaimed.”

According to the partial official results of the Comelec, sitting as the National Board of Canvassing, re-electionist Senators Cynthia Villar and Grace Poe continued to maintain their lead in the senatorial race.

Basar also said that those in the top six were not facing any “legal obstacle” for them not to be proclaimed as winners.

He said that the votes for senators placed sixth and above have a huge gap with those ranking seven and below.

Asked if the canvassing of votes would need to be finish 100 percent, Basar said: “In our case, the [tallying] need not be completed. It’s very clear. The gap is wide — in the millions. Compared those at numbers 10, 11, 12 — the gap is very wide.”

According to the Comelec, a total of 161 of the total 167 COCs nationwide — or 97 percent — have already been canvassed.

The proclamation of the newly elected senators and party-list representatives may happen within the week.

READ: Proclamation of winners of nat’l posts to take place this week — Comelec