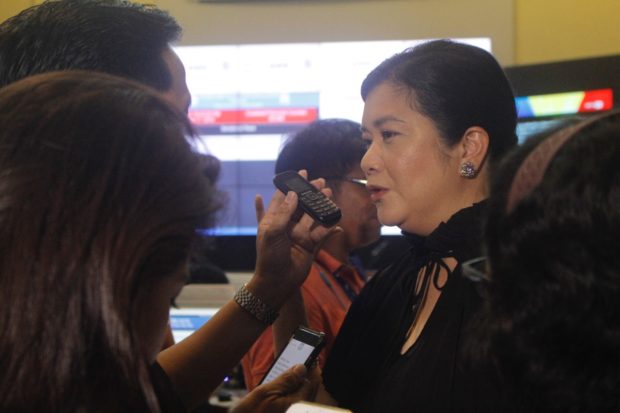 MANILA, Philippines — The election returns (ERs) verified by the Parish Pastoral Council for Responsible Voting (PPCRV) matched the data in the transparency server by 99.98 percent, according to chair Myla Villanueva.

“The data that we have in the transmission server matches 99.98 percent with the ERs that we have checked here. And these ERs today came from Lingayen, Tarlac, Kalibo, (Nueva) Viscaya, Cagayan de Oro, Pangasinan,” Villanueva told reporters at the PPCRV command center on Friday.

“For me that’s fine, there’s no significant (discrepancy),” she added.

As of Friday afternoon, PPCRV has verified 26,800 election returns or 30.61 percent of the total returns. More ERs are expected to come, Villanueva said.

“So we should be finished this evening with more even. There are more coming in,” she noted.

Villanueva explained that auditing the results on the transparency servers may take time, as election returns from far-flung areas have to be transported by PPCRV volunteers.

As an accredited citizen poll arm of the Commission on Elections (Comelec), PPCRV is entitled to a fourth copy of the election returns, which are released even before the vote counting machines (VCMs) transmit poll results to the Comelec central server.

(There are speculations about the election returns and questions such as where they go from the time it leaves the VCM and until it reaches the central server and the transparency server.)

(Before it transmits data, we already have a source of information on how many votes each candidate obtained. We match that with the results received electronically by the transparency server. That means we need to check if they match, and ensure that there is no vote saving and padding.)

Speculations of election fraud were ripe after reports of alleged discrepancies between the receipts released by VCMs and the actual shaded ballots. Then, videos surfaced showing pre-shaded ballots.

The seven-hour delay between the first transmission of poll results to the transparency server and the second update also cast doubt on the integrity of the elections.

Earlier, PPCRV said that it will check the logs of the transparency server during the time in question. The Comelec sent the records on Friday morning. (Editor: Eden Estopace)