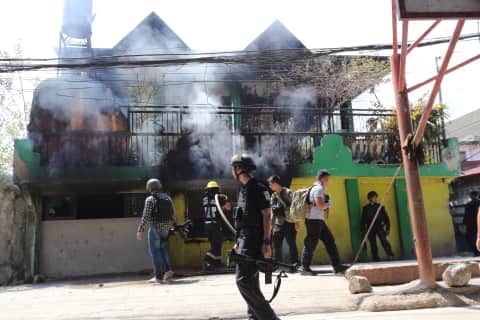 Firefighters try to put out a fire started by a retired US Navy serviceman in Barangay Lawaan III, Talisay City on Thursday morning. WENCESLAO “JUNJIE’ MENDOZA

A retired US Navy serviceman has shot and wounded at least five people at his residence in Barangay Lawaan III, Talisay City on Thursday morning.

Dean Torefranca reportedly went berserk and shot everyone who came near his house.

He also burned a part of the two-story house although firefighters were able to put it out immediately.

Among those wounded were Barangay Lawaan III Jimmy Bartilic, who along with the four other persons, was brought to the hospital for treatment.

As of 1:30 p.m., police were still negotiating for Torefranca to surrender. (Editor: Leti Boniol)