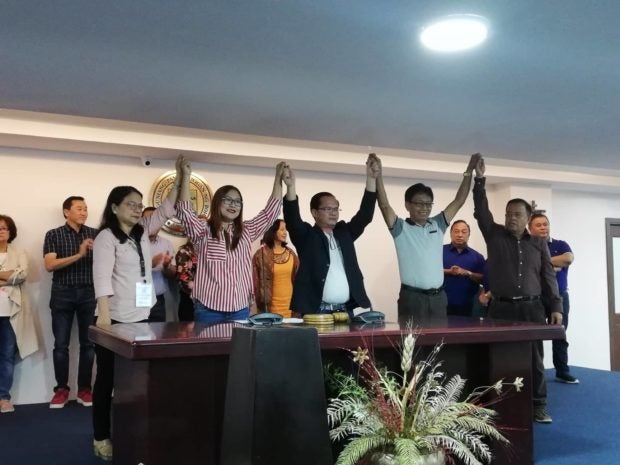 Vierna Mae Boniel-Maglasang was proclaimed as board member-elect of the 2nd district of Bohol on early Thursday, May 16, 2019. Leo Udtohan/Inquirer Visayas

TAGBILARAN CITY, Bohol, Philippines – The Bohol woman who took over her brother after he was charged for killing his wife has won in last Monday’s polls.

Vierna Mae Boniel-Maglasang was proclaimed winner as board member of the 2nd district at about 3:30 a.m. on Thursday with another board member-elect Restituto Auxtero.

Maglasang was appointed board member of the 2nd District to replace her brother, Niño Rey Boniel, who resigned after he was jailed in 2017 on allegations that he killed his wife, Gisela Bendong-Boniel, then mayor of Bien Unido town in Bohol.

Prior to her appointment, Maglasang served as legislative staff assistant III in her brother’s office.

During Thursday’s proclamation, Maglasang found herself the lone Evasco supporter inside the Sangguniang Panlalawigan session hall which was filled with supporters of Evasco’s rival, outgoing Rep. Arthur Yap.

Yap’s supporters were there to attend his proclamation as Bohol’s new governor.

Maglasang went out of the room after she was proclaimed. (Editor: Cenon B. Bibe Jr.)