A rare Asiatic black bear has been photographed in the Demilitarized Zone dividing the two Koreas, Seoul’s environmental ministry said. 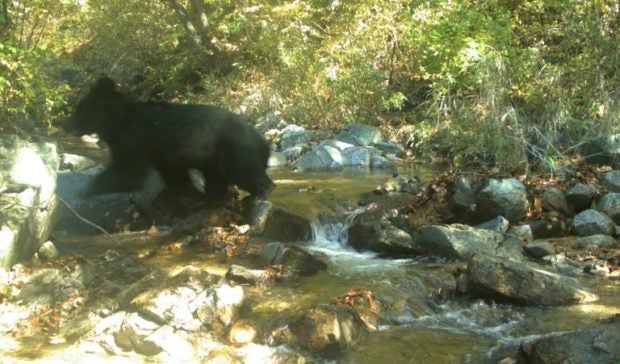 While some soldiers have reported seeing bears in the DMZ, it was the first time one had been photographed.  Image: AFP/South Korean Ministry of Environment

The area around the four-kilometer-wide strip running across the peninsula bristles with minefields and fortifications.

But while it is the world’s last Cold War frontier, the zone itself is known as one of the few areas where nature is untouched by development, and a haven for wildlife.

The bear was photographed by an unmanned research camera in October, Seoul’s environment ministry said.

Although there have been some testimonies by soldiers who said they saw Asian black bears inside the DMZ, it is the first time that an image of the animal had been captured in the area, it added.

It was a juvenile estimated to be 8 or 9 months old and weighing about 25-30 kilograms, the National Institute of Ecology said, and was presumed to be living in the DMZ with its parents.

The species—Latin name: Ursus thibetanus—is classed as vulnerable on the IUCN Red List of endangered species.

More than 5,000 plant and animal species have been identified in the DMZ, including the long-tailed goral wild goat and northern fur seal, according to the South Korean government.

Koreas to shut down some guard posts on DMZ

ADVERTISEMENT
Read Next
Senate derby: Jinggoy out of top 12 in partial Manila tally
EDITORS' PICK
Smart releases Hyun Bin’s second TVC
Current dominant strain of COVID-19 more infectious than original—study
Water remains our saving grace right now
DOLE: Return of OFWs’ remains from Saudi to be ‘delayed,’ deadline moved to ‘early next week’
‘Justice will be done,’ Duterte assures as he vowed probe on Jolo incident to bare ‘truth’
EuroMillions Superdraw: A lottery draw unlike any other is coming to the Philippines
MOST READ
Duterte tells military: No other president looked at you the way I did
BREAKING: Duterte signs anti-terror bill into law
Locsin warns of ‘severest response’ if China’s army drills in SCS ‘spill over’ to PH domain
Vico: Cleanup of bidding process saved Pasig gov’t P415M
Don't miss out on the latest news and information.