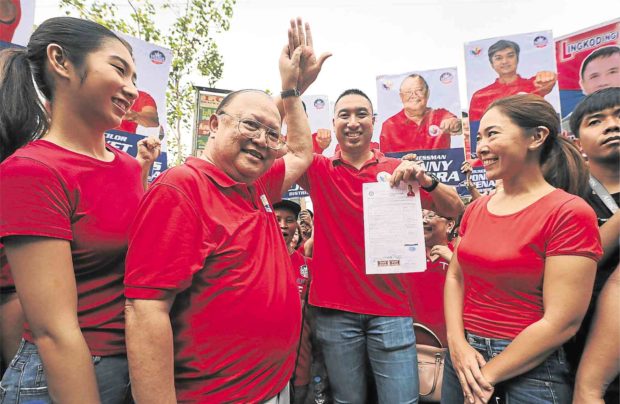 This photo, taken in October 2018, shows Francis Zamora filing his certificate of candidacy for San Juan mayor, accompanied by his father, Rep. Ronaldo Zamora. On Monday, May 13, 2019. Francis was proclaimed as San Juan mayor, while his father was also proclaimed as House representative. (Photo by GRIG C. MONTEGRANDE / Philippine Daily Inquirer)

MANILA, Philippines — Actor Edu Manzano lost his bid to be the House respresentative for the Lone District of San Juan to Ronaldo Zamora, who was proclaimed late Monday.

Results from the San Juan City Board of Canvassers showed that Zamora was able to obtain 35,386 votes, while Manzano only had 23,627.

Zamora is the father of the newly proclaimed San Juan Mayor Francis Zamora.

Manzano’s bid for a House seat was tainted with a disqualification case.

The Commission on Elections Second Division canceled Manzano’s certificate of candicacy, saying he was not a Filipino citizen when he filed it in October.

Manzano, who was born to Filipino parents in San Francisco, California, served in the United States Armed Forces from 1973 to 1977 — considered grounds for losing one’s Philippine citizenship under Commonwealth Act No. 63.