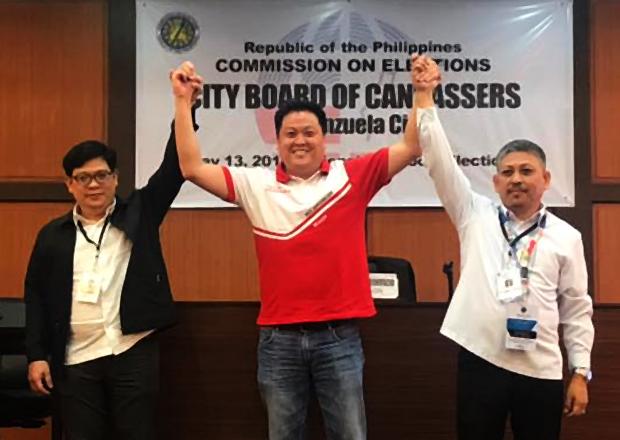 Valenzuela Mayor Rexlon Gatchalian got 249,508 votes — or 96.69 percent of the total number of votes. That gives him a third term as chief executive of the city. (Photo from his Facebook account)

The Valenzuela City Board of Canvassers proclaimed Gatchalian as the city mayor at 12:20 a.m. on Tuesday, after he garnered 249,508 votes — or 96.69 percent of the total number of votes.

This will be his third term as the chief executive of Valenzuela.

His opponents Bong Go and Bien Español trailed with 6,239 and 2,288 votes, respectively.

“This is the biggest mandate given to me. It’s overwhelming to see I have reached the 200,000 mark,” said Gatchalian in a phone interview.

The Nationalist People’s Coalition candidate said he would continue to focus on education during his third term. Gatchalian said that he would put a lot of time into building public libraries and continue different programs like reading and parenting camps.

He also aims to provide affordable healthcare to Valenzuela residents.

“Every single day counts. I will make sure promises are fulfilled,” he said

Eric Martinez was successful in his reelection bid as 2nd District representative. He garnered 106,848 votes, while his challenger, Magi Gunigundo, got 37,935.

Read Next
Election returns from Metro Manila start arriving at PPCRV
EDITORS' PICK
Nestlé Philippines’ ‘NESCAFÉ Plan’ bags Grand Anvil at PRSP 56th Anvil Awards
822 NPA-free barangays set to get P20-M gov’t aid — Esperon
Pope Francis to meet top cleric Sistani on second day in Iraq
Don’t waste the hope of vaccines, warns WHO
Every Filipino home can now be a smart home with realme TechLife
Smart reinforces superiority with best speed and mobile video experience in PH
MOST READ
So: I lacked connections to succeed in PH ‘culture’
Robredo on Sara Duterte leading poll surveys: Why are Filipinos drawn to leadership of this kind?
US weapons, hardware in exchange for VFA
US lays out list of aid to ‘satisfy’ Duterte following VFA payment demand
Don't miss out on the latest news and information.