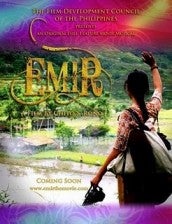 While it did well in producing a film—“Emir”—about the heroism of Filipino overseas workers, the Film Development Council of the Philippines (FDCP) has failed to justify the P12 million that it gave out in professional fees to various talents.

The Commission on Audit (COA) said there was no way to determine the reasonableness of the P12 million talent fees for lack of a reference guide, in violation of Republic Act No. 9184, or the Government Procurement Act.

While FDCP did obtain the services of professional talents, the “agency is not exempt from the law,” the COA said in its 2010 annual report on the FDCP.

Between September 2009 and June 2010, the FDCP received some P43.3 million in grants from the President’s Social Fund for the production and marketing of “Emir,” a film that tackled the dedication of Filipino nannies, the COA said in the report.

Verification of disbursements charged against the grant showed that some P12 million was paid to various talents, such as director, assistant director, actress, singers, stylist, cameraman, musicians, make-up artists, extras, among others, the audit agency said.

Most of the talents were hired on the recommendation of the line or movie producers, or were the personal choices of the director.

“The management, however, has no proper guideline to determine the prevailing talent fee in the movie industry, and there were no criteria to compare the fees charged by such talents. The reasonableness, therefore, of the fees could not be determined,” said COA.

That’s why, it said, the FDCP should have enlisted the help of the Government Procurement Policy Board in drafting a procurement manual to serve as a reference guide in the procurement of goods or services in the film industry.

The FDCP management explained that it is the line producers that look for talents and production staff, while the director selects from among the choices given, regardless of the talent fee.

The FDCP was created in 2002 to implement a cinema evaluation system, develop an incentive and reward system for Filipino producers based on merit, encourage the production of high quality films, and provide assistance for quality films for exhibition abroad.

It is currently headed by filmmaker Briccio Santos, who was appointed by President Aquino in September 2010. His immediate predecessor was Rolando Atienza.

The COA also reported that no bidding was conducted for catering services that the FDCP had contracted amounting to P1 million.

“The procurement selection for contract on catering services during the film shooting totaling P1,055,460.68 could not be determined due to lack of supporting documents,” it said.