newsinfo / Regions
Regions
ALL QUIET AT THE PRESIDENT’S HOMETOWN 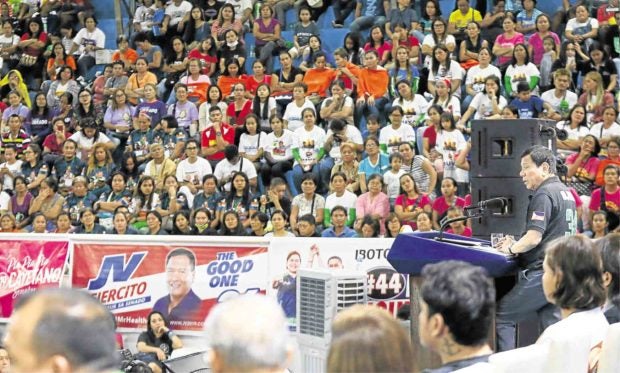 DAVAO CITY, Davao del Sur, Philippines — Except for the big two political rallies which briefly clogged the downtown city streets with people in the last two days of the campaign, it’s all too peaceful and quiet in hometown of President Rodrigo Duterte, whose three children are sure to win the city’s top posts.

Unlike in neighboring provinces and towns where sound systems are blaring and supporters of political candidates sometimes ended up in brawls, the election campaign was hardly felt here, where most of the candidates were running unopposed.

Even at the final mitin de avance rally at Almendras Gym, which the President guested on Friday, political candidates came no longer to campaign but to express thanks to supporters, regaling them with song-and-dance numbers.

In this city, where the President had been mayor for 22 years before being elected President, daughter Sara Duterte is running for her second term as city mayor against security guard Magdaleno Marcellones Jr., a perennial candidate who never won as mayor when the President was still the city’s chief executive.

The president’s daughter instead spent most days in the campaign period touring the country to barnstorm for the senatorial bets of the Hugpong ng Pagbabago (HnP), a regional party she founded.

Although the President won here as House representative in 1998, the area had been known as bailiwick of his former rival, the former House Speaker Prospero Nograles, who recently passed away and whose son Karlo currently serves in the President’s Cabinet.

The President’s youngest son Sebastian, popularly known as Baste, entered politics for the first time to run for vice mayor in the city. He is unopposed.

While political bets in other cities and provinces are fighting teeth and claw against their opponents, virtually most candidates for the key public posts here ran unopposed — including Vincent Garcia, who is running for a congressional seat in the city’s 2nd District and former Liberal Party turned HnP bet Isidro Ungab in the 3rd District.

But the President recently told HnP supporters it would not yet be this year’s elections which would prove “critical” for them but the one in 2022, when he steps down from the presidency.

During the HnP rally, he urged supporters to prepare when he steps down from the presidency, as he asked them to support daughter Sara, who is running for mayor, Paolo as 1st District representative, and Baste as vice mayor despite their assured win in the May 13 elections.

“Right now, you can still take it easy, but the critical days would be after I leave the presidency. That will be the time when you will be a bit on your toes,” he said at the HnP rally.

Although the regional party HnP was founded by Sara Duterte in February last year, Davao’s homegrown political group, Hugpong sa Tawong Lungsod, whose members form part of the HnP, had been the President’s political machinery for years when he ran for mayor in Davao City.

Sara, who figured in the ouster of the President’s ally, then House Speaker Pantaleon Alvarez, had earlier ignored supporters’ push for her to run for the Senate in the midterm elections.

But her high visibility during the national campaign for the 12 HnP senators made some people think she could be eyeing her father’s post.