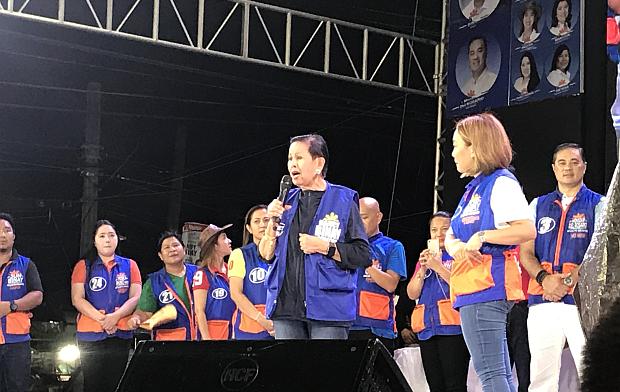 Elenita Binay speaks at the miting de avance of her son Junjun Binay and Sen. Nancy Binay on Saturday, May 11, 2019. (Photo by CONSUELO MARQUEZ / INQUIRER.net)

[I’m standing here in front of you to introduce the future, returning, new mayor.]

Elenita lauded Junjun for his qualities.

[Junjun has the same qualities that I have. And what are those qualities? Helpful, kind, easy to approach.]

Earlier in the rally, Binay siblings Anne, Nancy, and Junjun joined their mother on stage as they gave her flowers a day ahead of Mother’s Day.

Abby and Binay patriarch Jejomar were absent from the miting de avance.

On Friday, Abby staged her own miting de avance with her father, who’s running as House representative for the 1st District of Makati.