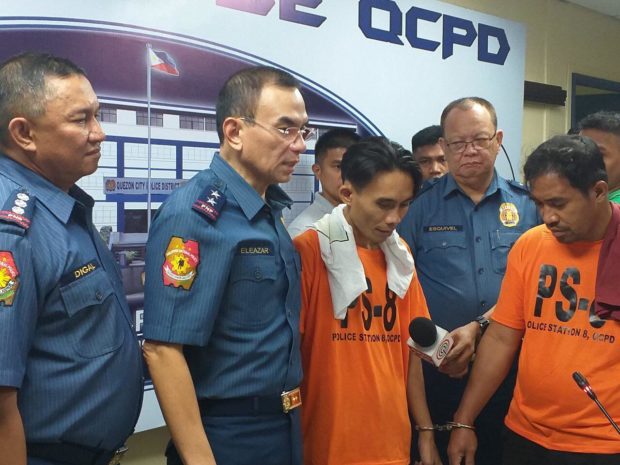 MANILA, Philippines — A member of the Moro National Liberation Front (MNLF) and his uncle were arrested as more than P1-million worth of shabu (crystal meth) had been seized from them during a buy-bust operation in Quezon City on Friday night.

Esquivel said the arrest stemmed from a previous anti-drug operation in Barangay Old Balara on Wednesday where suspects Nemia Castilla and Marites dela Cruz bared that Nadduha and Jhol were their source of illegal drugs.

After validating the information, police launched a buy-bust operation along Sta. Catalina, Barangay Holy Spirit wherein a police officer posed as a buyer and bought P50,000 worth of shabu from the suspects.

The suspects were then arrested while police seized 150 grams of shabu with a street value of P1,020,000.

The suspects revealed to police that their source of illegal drugs is from a Southeast Asian country.

Police also found that Jhol was arrested in 2003 by elements of the QCPD Talipapa police station for illegal drugs. He was sentenced to 13 years in jail.

Jhol and Nadduha will be charged for violation of Comprehensive Dangerous Drugs Act of 2002. (Editor: Jonathan P. Vicente)

Read Next
Briones urges DepEd execs to serve with integrity on election day
EDITORS' PICK
‘FPJ’s Ang Probinsyano’ officially ends after nearly 7 years
Red-tagged green activist recalls imprisonment
House energy committee chair Arroyo bats for cheap electricity
Authors unbowed after gov’t ‘purge’ of books
Powered by style, innovation and passion
A laptop that maximizes your WiFi so you can maximize your productivity
MOST READ
Arjo Atayde reveals proposal to Maine Mendoza was ‘more than a year’ in the making
‘FPJ’s Ang Probinsyano’ officially ends after nearly 7 years
Man, girlfriend found dead in Leyte river
Police hunt down farmer for slay of soldier in Samar
Don't miss out on the latest news and information.