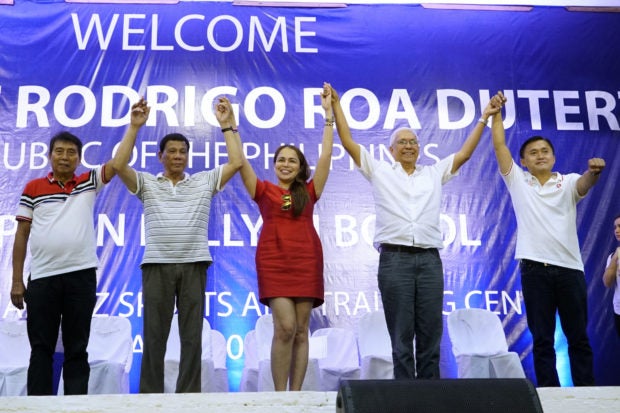 “[Y]ou are truly beautiful. If it were me, why would I ever break up with you? I will really grab and hold on to your panty if you try to leave, even until the garter snaps. You’re just too beautiful,” he said in Cebuano, drawing laughter from the crowd.

The President said he was in Bohol “to play the game of love.”

He even ordered his long – time aide Christopher “Bong” Go to “take care” of his wife while he was away.

Duterte was previously married to Elizabeth Zimmerman for 25 years until their marriage was annulled in 1998.

He is living now with his partner, Honeylet Avanceña.

“He’s (Go) been with me for 22 years now. I can trust him with my money and even with my wife. That’s true. You can trust him with money. Please take care of my wife while I’m away. I am here in Bohol to play. To play the game of love,” Duterte said as he regaled his audience.

“Ma’am is frowning already,” he added, referring to Baja-Gallantes.

“She’s probably thinking, “P***** i** ka Duterte, if you don’t fulfill your promise, you better watch out or else I’ll have you assassinated by my police.”

But the President did not stop there.

He even asked the mayor to “run away” with him.

“Can you run away with me? You have children, don’t you mayor? How many children do you have? I have three — four. I have four but they’re all grown up already so I don’t have a problem there anymore,” he said.

He even cited that the mayor was already separated from her husband.

“Actually I’m not trying to pull your leg. But the truth is ang balita ko, if I may allow to say it in public and it will not offend you, you and your husband are separated,” he said.

This was not the first time the President made obscene remarks in his public speeches.

In December, Duterte narrated how he touched her maid’s private part.

The President was also criticized for ordering the military in February 2018 to shoot female communist rebels in the vagina.

READ: President Duterte slammed by writers, activists for ‘shoot in the vagina’ statement

Duterte has defended himself, saying it was “sort of sarcasm.” /gsg