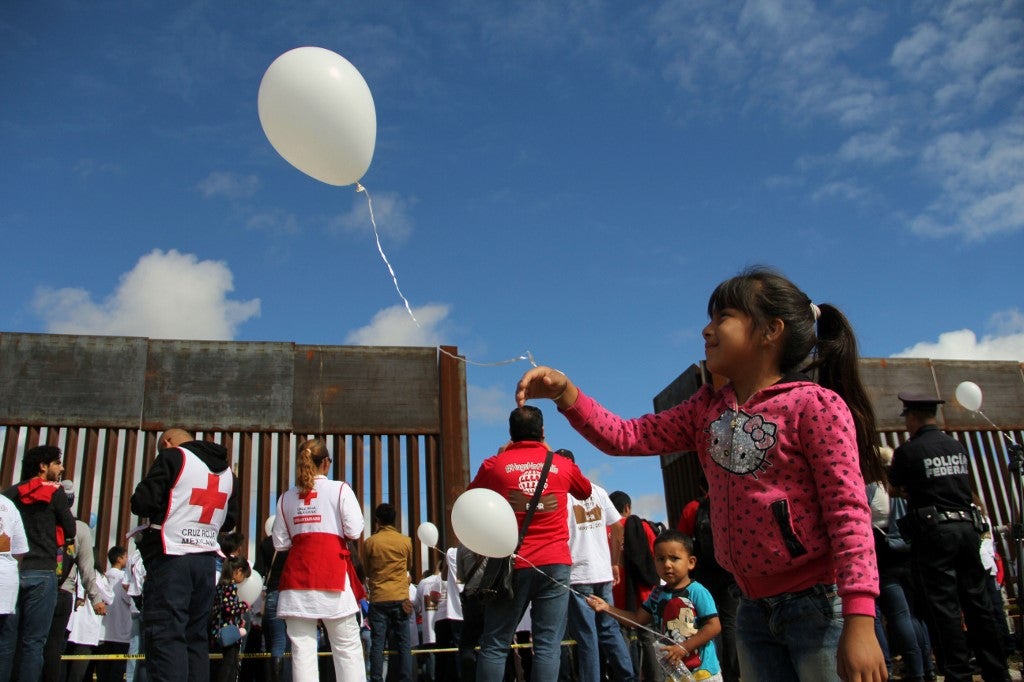 Members of migrant families living in the US and Mexico release balloons after taking part in an event called “Abrazos No Muros” (Hugs, not walls) promoted by the Border etwork of Human Rights organization in the border line between Sunland Park, New Mexico State, United States and Ciudad Juarez, state of Chihuahua, Mexico, on 13 October 2018. (Photo by HERIKA MARTINEZ / AFP)

CIUDAD JUÁREZ, Mexico — US authorities have denied permits and forced the cancellation of the “Hugs not walls” event which since 2016 has allowed families separated by illegal migration to reunite for a few minutes on the border with Mexico, organizers said.

Some 150 families had already registered to take part in the seventh “Abrazos No muros” meeting, scheduled for Saturday on the border between Mexico’s Ciudad Juarez and the US city of El Paso in Texas.

“(US) border agencies and institutions created all possible obstacles and invented all possible pretexts to prevent this important and historic family reunion on the border,” organizers the Border Network for Human Rights (RFDH) said in a statement Wednesday.

“Everyone clearly followed the xenophobic script of (US President Donald) Trump,” it added, noting that both the police and the US Border Patrol had hampered the initiative.

RFDH director Fernando García regretted the cancellation of the event, which he said since 2016 has brought together members of 1,500 families from various areas of the US, Mexico and Central America.

“Today, in this America, led by this administration, a family hug and a fraternal embrace represent ‘a threat to national security.’ This is beyond irrational,” Garcia said.

Armando Bustamante, 24, who lives in Ciudad Juarez, had expected to embrace his mother, who has lived in El Paso for nine years as an undocumented immigrant, and celebrate Mother’s Day, which is marked on Friday in Mexico and Sunday in the US.

The student said he had been able to hug his mother twice since he began taking part in the event.

“It’s a pity that I’ll have to wait for another event to take place and in that way be able to see my mother … even if it was just for a couple of minutes,” Bustamante told AFP, hoping that US authorities would authorize another date for the event.

In recent months, thousands of migrants have arrived in Mexico, primarily Central Americans fleeing poverty and violence at home.

President Trump has described them as a threat to national security, demanding billions of dollars from Congress to build a wall on the southern border.