The name “Archie” for Prince Harry and Meghan Markle’s newborn may not have been an expected bet, given the British royal family’s history of naming children after their ancestors. 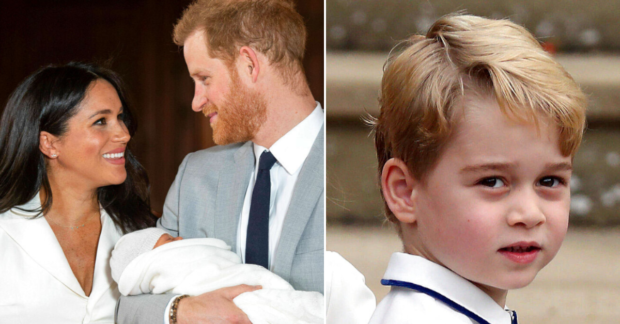 The composite photo shows the Duke and Duchess of Sussex with their newborn (L) and Prince George (R). Image: AP

But could Prince George — Prince William and Kate Middleton’s first child — have hinted at the name months before baby Archie Harrison Mountbatten-Windsor was due?

In January, the 5-year-old heir to the throne told a stranger that his name was Archie, The Sun reported.

George and sister Charlotte were with grandmother Carole Middleton when a woman spotted them while they were near a stream in Berkshire, in south east England.

The woman, who remained anonymous, was walking her dog, which interested George. He began to pet the dog so she talked to him.

When she asked him his name, she was surprised with his response. “To my astonishment he said ‘I’m called Archie’ with a big smile on his face. I don’t know why he calls himself Archie but kids often play with their names and I think it’s lovely.”

It can only be speculated why George said so, and how it connects to his new cousin’s first name. Whether he inspired the name or was being cheeky about it is any royal fan’s guess.

Meanwhile, People believes it could be inspired by Princess Diana’s ancestor, Archibald Campbell, 9th Earl of Argyll, as per a report on Wednesday, May 8. It said the Earl lived in the 1600s, a Scottish Protestant leader who was executed by King James II, a Roman Catholic.

And then there are “Riverdale” fans who muse that Meghan could be a fan of the redheaded Archie. BBC noted in its report on Wednesday that “Archie” is one of the most popular names in England and Wales.