Walking around the metro may be a struggle for regular commuters, but to a certain Art Cuvinar, it has been part of his life, along with his artworks.

“Ito ang buhay ko,” it was what Cuvinar said to Maeriel Aquino, a netizen who posted the now viral photos of “Tatay Art” on Facebook last April 29, where she also shared her short yet inspiring encounter with the artist.

In her post, Aquino narrated what happened the night when she was about to dine with her 3-year-old cousin, Kendra Aquino, in Scrapyard Restaurant in Angono, Rizal one Sunday, April 28. This was when “Tatay Art” suddenly approached them.

(At first, we got scared because he suddenly approached us and got beside Kendra.)

Cuvinar gently rubbed Kendra’s head and asked them if it was her birthday because her dress looked good on her. In response, Aquino told him that it is just Kendra’s usual dress whenever they go out because she loves Disney Princesses.

(Even I got worried since he was a stranger, so I quickly called my uncle to ask him to move away, or to ask him what his intentions are. I thought it was for a religious matter, until I found out that he draws.)

Her cousin Kendra was so happy upon receiving her portrait made by Tatay Art. 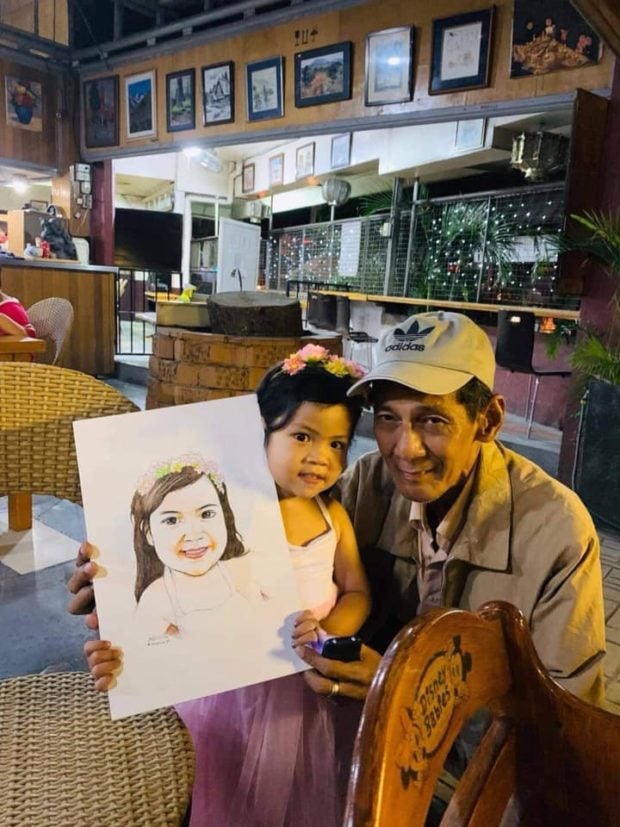 Aquino said Tatay Art told her that he does not have his own place to sell his artworks. He instead roams around the metro to look for prospective customers who would hire him and buy his crafts.

He visits the same restaurant in Angono every weekend, while on weekdays, he stays in SM Angono.

“Sana matulungan natin si Tatay (I hope we could help Tatay),” Aquino said. She also indicated Tatay Art’s contact number (‭0949-935-3177‬) for those who would like to hire him and buy his works.

(If you will ask him for a sketch, it costs 150 pesos. But if I were you, you may give additional payment to him because he sells his works for a low price. It would also help him.)

In an exclusive interview with INQUIRER.net, Aquino said she was not able to ask additional details about Cuvinar, even his age, but she knew that he supposedly has a Facebook account under the name Art Cuvinar.

Aquino’s post already garnered over 48,000 likes, 9,700 comments and 21,000 shares as of this writing. Meanwhile, INQUIRER.net is yet to receive a response from Cuvinar. JB