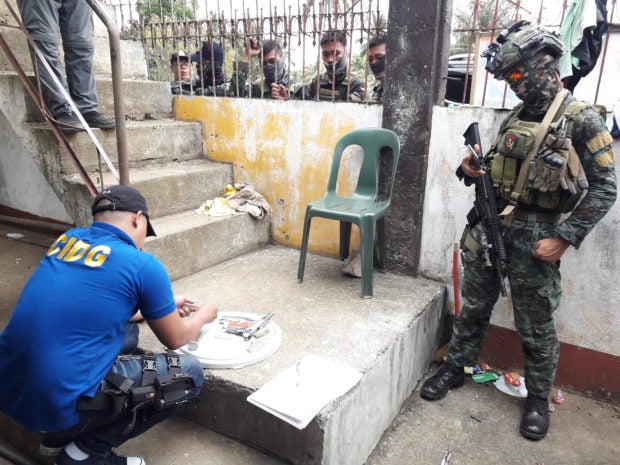 A member of the Criminal Investigation and Detection Group (CIDG) conducts an inventory of the items seized from the house of one of the children of former Pantar Mayor Malik Alingan in Barangay Poona Punod, Pantar, Lanao del Norte on May 08, 2019. PHOTO by Divina M. Suson/INQUIRER.net

PANTAR, Lanao del Norte — A former mayor of Pantar, Lanao del Norte was ‘invited’ by the Criminal Investigation and Detection Group (CIDG) to their office in Iligan City after a search in his family’s compound yielded a gun.

Police Major Jomar Penullar, head of CIDG-Lanao del Norte, said the gun was found in the house of a daughter of Malik Alingan in Barangay Poona Punod, Pantar at 2 a.m. on Wednesday, May 8.

He said Alingan was ‘invited’ to their office to “clarify and answer questions” about the caliber .45 pistol loaded with 10 ammunition and another two magazines. Live ammunition was also recovered from one of the rooms in a two-story house owned by one of his daughters.

However, no firearm was found in the house occupied by the former mayor.

Alingan was the subject of the search warrant issued by Kapatagan Regional Trial Court Executive Judge Alberto Quinto on suspicion that he owned an unlicensed firearm.

“We are going to file a case, in violation of Republic Act 10591, or the Comprehensive Law on Firearms and Ammunition, against the owner of the house,” Penullar said in an interview.

Alingan’s children, who were around during the search, said their sister Leonor, who is married to a Nader Cabatua, owns the house, but they have been living in Bacolod City for the past 10 years.

Some relatives sleep in Leonor’s house from time to time, according to one of Alingan’s children who asked not to be identified.

His daughter, Lianera Alingan-Usman, is one of the town’s 10 mayoralty candidates running in the May 13 elections. She is running under the United Nationalist Alliance (UNA). /ee