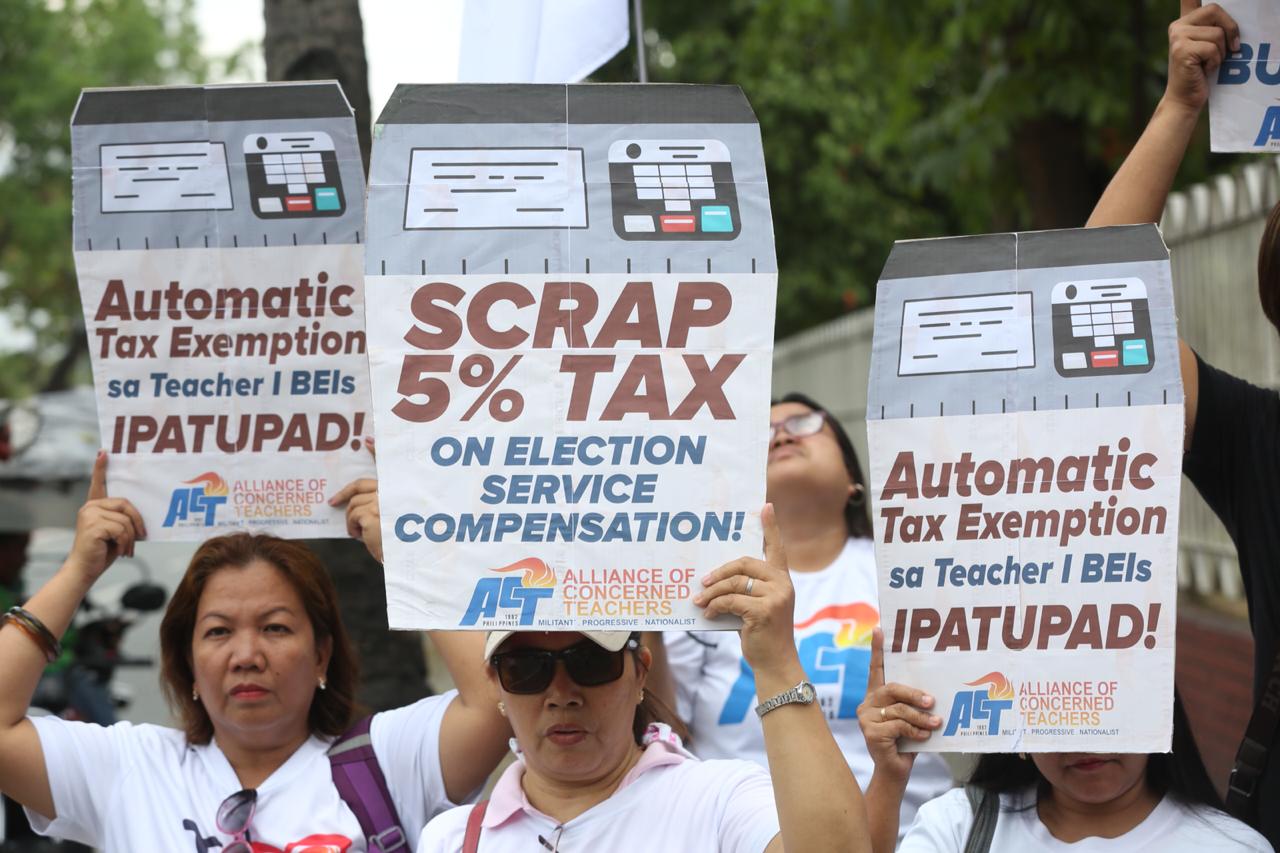 Alliance of Concerned Teachers troop in front of Bureau of Internal Revenue in Quezon City on Monday, to protest the continued imposition of unwarranted 5% tax on their election service honoria and allowances. INQUIRER / NIÑO JESUS ORBETA

MANILA, Philippines — The allowances and honoraria of teachers who will serve as members of electoral boards during the May 13 midterm polls are tax-exempt if they fall below the P250,000 annual income threshold, the Bureau of Internal Revenue (BIR) said Wednesday.

In a statement, the country’s biggest tax-collection agency said it issued BIR Ruling No. 759-18 last year to clarify the tax treatment for teachers’ allowances in relation to their service during election day.

To recall, the Tax Reform for Acceleration and Inclusion (TRAIN) Act brought down the tax-exempt threshold to an annual income—including bonuses and allowance—of P250,000 and below.

“For administrative ease, the teachers and qualified persons serving in the electoral boards will just have to execute and submit to Comelec [the Commission on Elections], prior to the release of the honorarium/allowances, a sworn declaration stating that their gross annual income will not exceed P250,000 in order that the same shall not be subject to withholding tax,” it added.

The agency said it already furnished copies of this BIR ruling to Comelec and the Alliance of Concerned Teachers (ACT).

“As the nationwide election comes closer, the GSIS is also implementing measures to put in check the membership records and loan accounts of concerned members. Over 30,000 confidential, coterminous, appointed, and elective employees whose term of office expires in June will not be qualified to avail of GSIS loans,” president and general manager Jesus Clint O. Aranas said in a statement.

“After the elections, however, the GSIS will immediately restore the loan privileges of reappointed and reelected officials or employees once their respective agency heads update the pension fund on the status of their employment,” Aranas said.

As such, “prompt notice from concerned agency authorized officers is crucial to ensure the correct tagging of members’ records in the GSIS database,” he said.

But Aranas clarified that “not included in the restrictions are those coterminous, confidential, appointive employees and elective officials whose tenure of office will not end on June 30.”