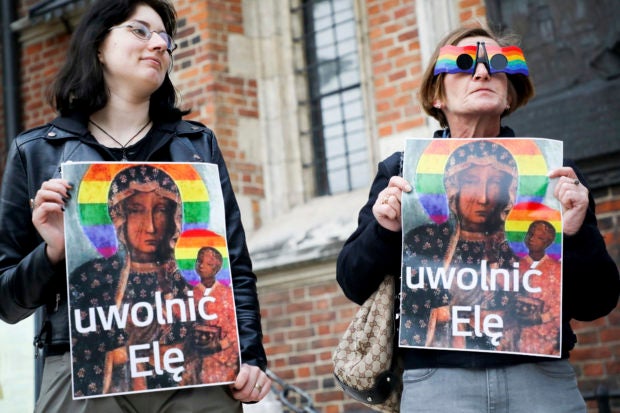 Picketers with posters of Poland’s most-revered icon of Mother of God of Czestochowa with the LGBT rainbow colors added to its halos in Krakow, Poland, May 6, 2019. Image: AP/Beata Zawrzel

WARSAW, Poland — Rights groups and government critics in Poland protested Tuesday, May 7, after police temporarily detained a human rights activist for putting up posters depicting the country’s most revered Catholic icon with the Lesbian, Gay, Bisexual and Transgender (LGBT) rainbow on the halos of Mary and baby Jesus.

Prosecutors in the central city of Plock said the woman has been questioned and has heard charges of insulting religious feelings and desecration of the icon of Mother of God of Czestochowa, popularly known as the Black Madonna of Czestochowa, a painting housed at the Jasna Gora monastery in the city in southern Poland since the 14th-century.

The activist, 51-year-old Elzbieta Podlesna, last month placed posters with altered images of the icon on walls, garbage bins and mobile toilets near St. Dominik’s church in Plock. She did not physically damage the icon, which was venerated by pontiffs, including Pope John Paul II.

About 300 people with a giant rainbow flag and holding posters of the altered icon heard speeches from human rights activists as they staged a peaceful protest in downtown Warsaw. 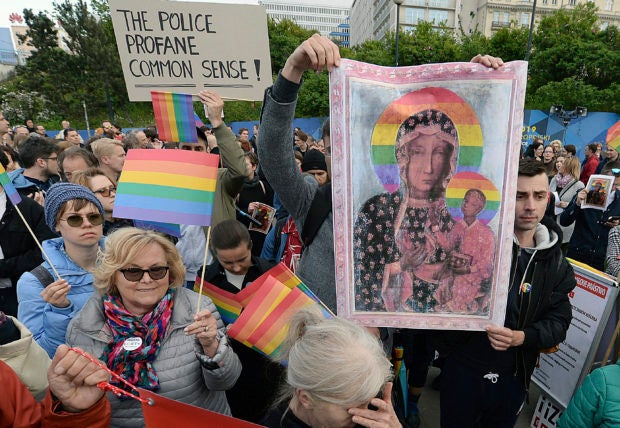 Participants in a protest hold copies of the posters and a giant rainbow flag in support of Elzbieta Podlesna, in Warsaw, Poland, Tuesday, May 7, 2019. Image: AP/Czarek Sokolowski

Earlier Tuesday, European Council president Donald Tusk, who was in his native Poland, said the Polish authorities’ harsh reaction was “inconceivable.” The Warsaw-based Helsinki Foundation of Human Rights found the raid on Podlesna’s home and her brief detention “hard to understand.”

But former Prime Minister and European Parliament member Jerzy Buzek said things like altering the revered icon’s image “should not take place because they can insult people who are deep believers.”

Dariusz Rosati, a former left-wing foreign minister who is now running for the European Parliament, suggested using less controversial campaigning that would avoid provoking some groups in society.

The case has highlighted the clash in predominantly Catholic Poland between the freedom of speech and laws banning hostility against religious beliefs. On social media, debate raged between critics of the government who said it was an abuse of power, and Catholics and backers of the conservative ruling party who argued their feelings were intentionally hurt.

Deputy Justice Minister Patryk Jaki called the posters part of a campaign to “humiliate Catholics” and said it has to be stopped.

The dispute came ahead of this month’s European Parliament elections.

In recent weeks, the ruling rightwing Law and Justice party has described the LGBT rights movement as a danger to Polish families and children. It seemed to be tapping into a belief held by some Poles that liberal values have been forced on them as a result of Poland joining the European Union (EU) 15 years ago. 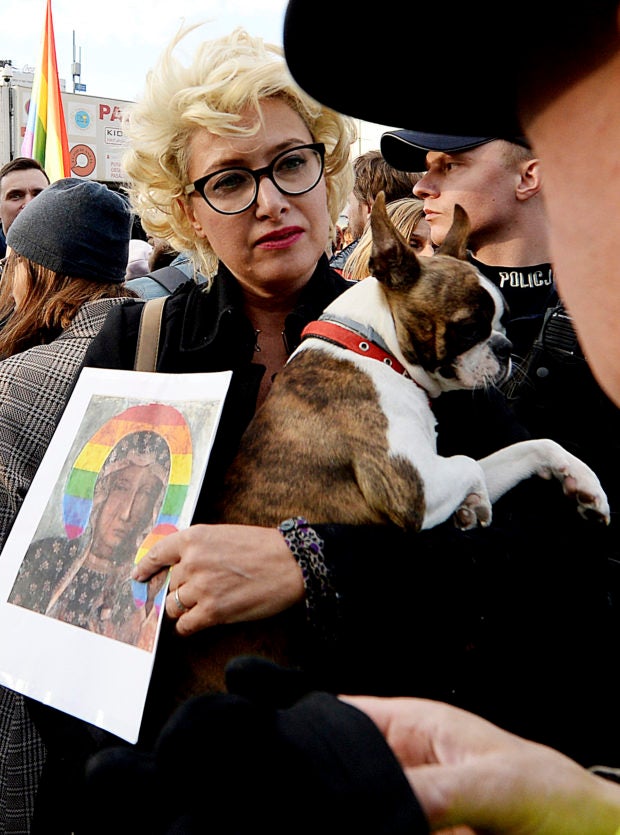 Participants in a protest hold copies of the posters in support of Elzbieta Podlesna, in Warsaw, Poland, Tuesday, May 7, 2019. Image: AP/Czarek Sokolowski

LGBT rights have become increasingly visible as more Polish cities and towns hold gay pride parades, including in places known as bastions of the church and conservative values like Czestochowa.

Podlesna said police came for her early Monday and searched her home. She was put in custody for several hours. She could face up to two years in prison or a stiff fine if convicted.

Interior Minister Joachim Brudzinski thanked the police for their action and said that the principles of freedom and tolerance did not give anyone the right to hurt the feelings of believers.

Poland is predominantly Catholic and its government is conservative and pro-church, in recognition of the church’s supportive role in the country’s struggle for freedom during World War II and later against communist rule.

Jasna Gora is the nation’s holiest shrine, drawing hundreds of thousands in annual pilgrimages. The late Pope John Paul II, who was Polish-born, visited it since childhood and as a clandestine student during World War II.

The church has recently been under criticism in Poland for its continuing prominent role in state matters, and for revealing hundreds of covered-up cases of sexual abuse of minors by priests.

Public opinion surveys have shown falling support for having nuns and priests, or even lay educators, teach religion in public schools. CE/JB

Read Next
Otso Diretso kickstarts ‘pasasalamat’ concert at UP Diliman
EDITORS' PICK
BREAKING: 3,226 latest COVID-19 cases bring PH’s total to 106,330
A gem of a residence in the new normal
Been there, done that but what’s the difference between MECQ and GCQ?
Smart 5G goes live
Water remains our saving grace right now
PNP: Checkpoints back in MECQ areas
MOST READ
You’re my ‘idol’ in crafting laws, neophyte senator ‘Bato’ tells Drilon
MECQ guidelines in infographics
Lacson takes up cudgels for health workers ‘threatened’ by Duterte
MECQ in NCR, other areas: Mass transportation suspended, quarantine pass required anew
Don't miss out on the latest news and information.