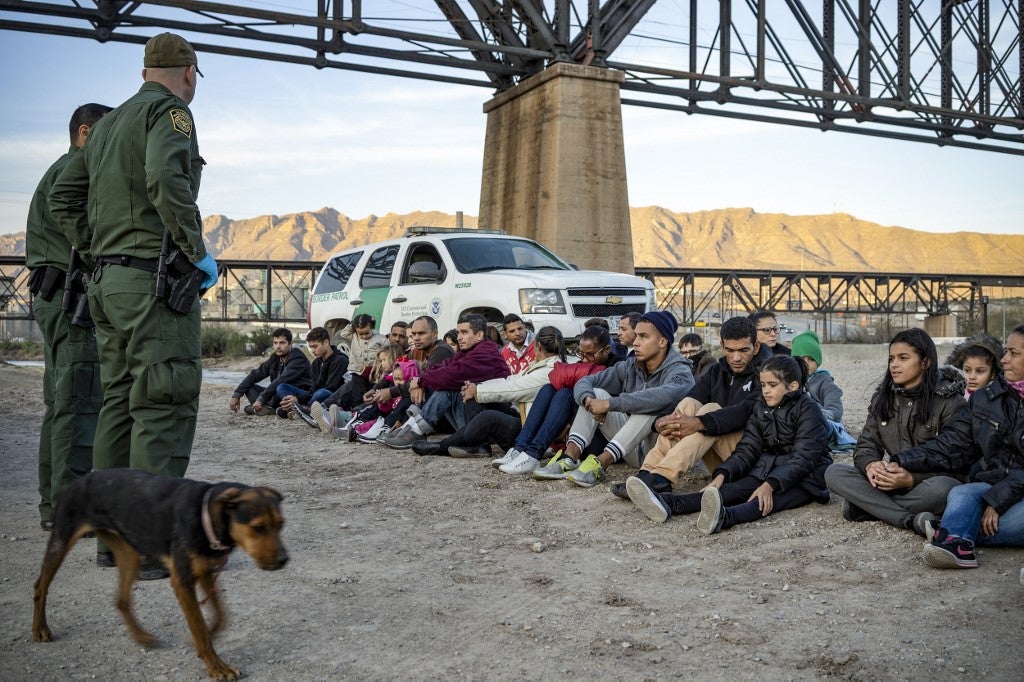 In this file photo taken on March 20, 2019 a group of about 30 Brazilian migrants, who had just crossed the border, sit on the ground near US Border Patrol agents, on the property of Jeff Allen, who used to run a brick factory near Mt. Christo Rey on the US-Mexico border in Sunland Park, New Mexico. (AFP)

WASHINGTON — Reviving a deeply contentious issue that has stymied both Congress and the administration, the White House launched a new bid Tuesday to overhaul the national immigration system that President Donald Trump relentlessly rails against.

Though similar efforts have failed to garner anywhere near the support necessary, Trump hopefully invited a dozen Republican senators to the White House to preview the plan, which was spearheaded by senior adviser and presidential son-in-law Jared Kushner.

It’s the latest step in a new, more methodical approach for an administration often marked by Trump’s hastily written executive orders and declarations by tweet. Kushner’s team has pulled in officials with experience in legislation-writing from other agencies, including the Department of Homeland Security, to help with the drafting.

Still, the road to passage remains uphill. Democrats are likely to strongly disapprove of parts of the plan.

Under the plan, which does not address temporary visa categories, including for laborers, the same number of immigrants would be permitted to enter the country, but their composition would change.

The White House is also working with Sen. Lindsey Graham of South Carolina on additional legislation that would address the nation’s asylum system, in an effort to stem the flow of migrants across the border, according to a senior administration official, who spoke on condition of anonymity to outline the plan.

It’s just the latest effort by the Trump White House to push Congress to overhaul immigration laws that he has long complained compromise national security and depress American workers’ wages by allowing too many immigrants to compete for jobs. But Trump has also said the country needs more workers thanks to economic gains and has said that educated, killed workers — especially those who graduate from American colleges — should be able to stay and work.

While Trump had previously rejected an earlier version of Kushner’s proposal, asking him to incorporate more border security measures, the senior official told reporters after the meeting Tuesday that Trump had signed off on the effort last week and it should now be considered “the President Trump plan.”

The White House is now seeking feedback and pressing for support from Republican lawmakers.

The official declined to say when more details would be unveiled or how the White House intended to get Democrats — who have yet to be briefed on the plan — on board.

Several GOP senators who attended the meeting did compliment the effort.

David Perdue of Georgia said Trump was “developing a platform for immigration that he can be for — and I was impressed.”

“The conversation was about border security and the immigration side — how to become much more effective at allowing the right kind,” he said.

Tom Cotton of Arkansas said, “I heard large areas of agreement from everyone in the room.” He said he still needs to see details, but things are “moving in the right direction.”

Kevin Cramer of North Dakota called it a “good starting point” that could be appealing to Democrats in the right situation. He said, “I think the environment right now with the booming economy, workforce demands, a crisis at the border that’s no longer deemed manufactured presents an opportunity for discussion.”

But Democrats were skeptical of a Republican-only effort that fails to incorporate Democratic priorities on immigration.

Rep. Pete Aguilar of California said, “I appreciate our Republican senators weighing in on this issue, but if their solution is to cut legal immigration it’s a nonstarter for us.” He added, “We’ll see.”

And former Vice President Joe Biden, who is running for the Democratic nomination to challenge Trump, accused the president Tuesday of using immigration “to demonize people.”

“It isn’t who we are. We’re better than that,” Biden said as he kicked off a rally.

Any immigration plan is sure to face a challenge on Capitol Hill where lawmakers have struggled for decades to pass comprehensive immigration legislation. Conservative Republicans are likely to oppose a plan that does not cut rates of legal immigration, while Democrats have made clear they will not accept changes without new protections for “Dreamer” immigrants who were brought to the country as children and are here illegally. Some Republicans, especially those from election swing states, would like to see protections for Dreamers as well, but that issue does not appear to be included in Kushner’s plan.

There has also been skepticism about Kushner’s involvement, given he has no previous background on the complex and controversial subject. But Kushner has spent months meeting with various Republican groups, hoping to put together a proposal that can unite party members, following the playbook he used to help pass bipartisan criminal justice reform legislation last year.

A previous attempt by Trump to reach a comprehensive immigration deal with Congress collapsed last year, and there is deep doubt in Washington that there is any appetite on Capitol Hill for a wide-ranging agreement.

Trump put immigration at the center of his presidential campaign, including a promise to build a wall along the U.S-Mexico border. He is expected to continue to hammer the issue in his re-election campaign as he tries to energize his base of supporters.

Read Next
US pregnancy deaths are up, especially among minorities
EDITORS' PICK
Duterte signs law giving rights, more protection to foundlings
Comelec won’t proclaim party-list groups yet
Honolulu Café is the cure for your Egg Tarts and Roastings cravings
DOJ-led panel drops 29 cases of torture, EJKs
Luxe property: A way to build, preserve wealth
House energy committee chair Arroyo bats for cheap electricity
MOST READ
Heart Evangelista gets a ‘no’ from Chiz Escudero after asking, ‘Do I deserve a bag?’
BIZ BUZZ: Flip-flopping BIR
3 Iloilo residents found with Omicron subvariant
Man posing as Marcos spox revealed to be an inmate in Bilibid — Guevarra
Don't miss out on the latest news and information.