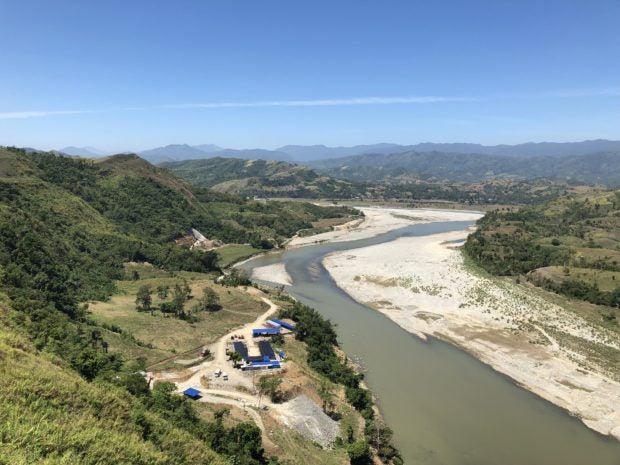 CHANNELING WATER The site of the Chico River Pump Irrigation Project in Kalinga province. Proponents say more than 7,500 hectares of rice farms in Cagayan province and 1,170 ha in Kalinga stand to benefit from the Chinese-funded irrigation system. —PHOTO COURTESY OF CORDILLERA PEOPLES ALLIANCE

BAGUIO CITY, BENGUET, Philippines — Work on the Chinese-financed Chico River Pump Irrigation Project should be suspended because the National Irrigation Administration (NIA) and its Chinese contractor have not been issued a certification that they obtained the consent of affected tribes in Kalinga province, a committee of the Cordillera Regional Development Council (RDC) said on Tuesday.

“In order not to aggravate the situation, work needs to be stopped,” said Sumanghal Sagga, legal affairs director of the National Commission on Indigenous Peoples (NCIP).

Workers of China CAMC Engineering Co. have begun constructing 143 kilometers of diversion tunnels and lateral canals that would channel water from the Chico River to 7,500 hectares of rice farms in the towns of Tuao and Piat in Cagayan province and 1,170 ha of farms in Pinukpuk town, Kalinga.

But the NIA proceeded with the project even without a certificate precondition (CP), said Roland Calde, Cordillera director of the NCIP, at a meeting in the Cordillera office of the National Economic and Development Authority (Neda).

The CP would indicate that the government project received the free, prior and informed consent of clans in Kalinga whose lands have been purchased for the project.

Calde heads the RDC committee on indigenous concerns, which reviewed the P4.373-billion Chico irrigation project that was developed and is being overseen by the NIA regional office in Cagayan Valley.

The tunnels are being put together along riverside communities in Pinukpuk and Tuao.

In a letter on May 3, the NCIP directed the NIA to suspend the project following reports of earth-moving there, Calde said. NIA representatives, who attended the Neda regional meeting, denied receiving the letter.

Earlier, on March 19, the Cordillera RDC passed a resolution addressed to the NIA and urging the agency to suspend the project.

During the meeting, the NIA said construction of the pump system began in September 2018, or two months after the agency drew up a memorandum of agreement with Kalinga families on compensation and the use of their lands.

It admitted that it did not have the CP when it started the work, reasoning that the project was the “clamor of the people” there.

Calde said it could not process the document immediately because the NIA had submitted details about its compensation agreement with the Kalinga families only on April 22.

But NCIP Commissioner Gaspar Cayat said the NIA should comply with the process since any violation would backfire on the government.

“We need to fix the mess now in order to directly address the issues raised by our constituents,” Cayat said.

The NIA claims that it had not received any of the letters from the Cordillera RDC “was not a good excuse,” he added.

The NCIP is scheduled to deliberate on the Chico project’s CP from May 22 to 25.

The committee also tackled resolutions passed by the RDC and the Kalinga local government, which sought to widen the Chico project’s coverage by adding farms in Kalinga’s Rizal town.

Federico Ordinario, a technical staff member of NIA Cagayan Valley, shot down the proposal, saying his agency would need more machines to pump water to the elevated farms of Kalinga.

The 175-km-long Chico River has its headwaters in Mountain Province, also in the Cordillera region. It empties into Cagayan.

Outside Neda’s Cordillera office, around 20 members of the Cordillera Peoples Alliance staged a rally to protest the Chico project.

All farmers need irrigation, but it should not be financed by an allegedly onerous loan from China Eximbank, which has been questioned before the Supreme Court, said Joan Ngayaan, a Kalinga resident.

Ngayaan is a daughter of the late Daniel Ngayaan, who disappeared after leading the opposition against the Chico dam projects during the Marcos regime. —WITH A REPORT FROM KIMBERLIE QUITASOL