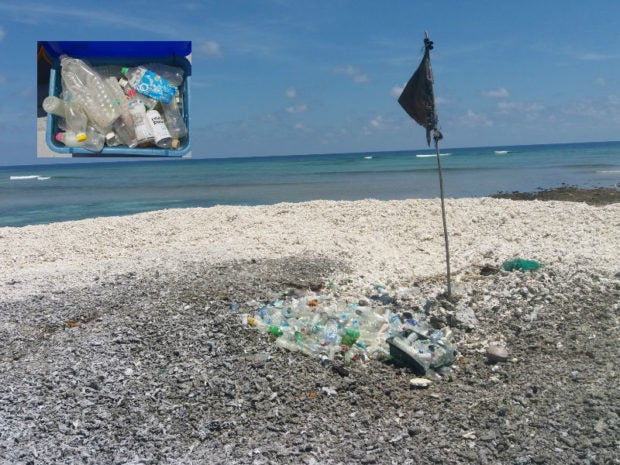 OCEAN LITTER During a recent marine science expedition, researchers from the University of the Philippines found plastic bottles, sachets, cigarette packs and fluorescent lamps, among other garbage, on sandbars in the Kalayaan Island Group, areas in the South China Sea claimed by Manila. —PHOTOS COURTESY OF DEO FLORENCE ONDA AND KEVIN LABRADOR OF UP MARINE SCIENCE INSTITUTE

MANILA, Philippines — When a team of young marine scientists sailed to the Kalayaan Island Group in the West Philippine Sea (WPS) to study its biodiversity, they came across an unwanted ocean traveler: man-made garbage.

As pods of dolphins racing against a stunning sunset welcomed the expedition led by the University of the Philippines’ Marine Science Institute (UP MSI) last month, the sight of plastic waste and other floating garbage stole the beauty of the pristine waters.

The 74-member “Protect WPS” expedition, or Predicting Responses between Ocean Transport and Ecological Connectivity of Threatened ecosystems in WPS, left Manila on April 22 and returned last Sunday, after nearly two weeks in the open waters.

The mission aimed to look at the “connectivity” of the ecosystems in the WPS, the local name for the waters within the country’s 370-kilometer exclusive economic zone (EEZ) in the South China Sea, and its impact on Luzon and Palawan province, particularly on fisheries.

While previous studies had shown how fish eggs and larvae could travel to other parts of the country, the discovery of plastic pollutants was evidence that the connection among the marine ecosystems was indeed strong—not only in terms of ocean life but also between human litter and the health of the seas.

“Those are things that you wouldn’t expect to be there,” said Deo Florence Onda, the team’s chief scientist. “We have such a rich biodiversity in the area, but you also have this problem, this threat that accumulates over time.”

This problem was spotted not only floating in the open sea, but also washed ashore on several sandbars in nearby reefs.

The trash that had accumulated in the middle of a sandbar on Kota (Loaita) Island was like a growing mound of garbage.

A boat sailing from the nearest city, Puerto Princesa in Palawan, would take over a day to reach this islet. The distance and travel time gave the researchers an idea of how much and how far man-made waste are covering parts of our EEZ.

“For a place [as far away] as that, we wouldn’t expect anything like this,” said Kevin Labrador, a graduate student who volunteered to join the expedition. “We were really taken aback.”

The researchers saw plastic bottles, cigarette packs, discarded fishing equipment, rubber slippers and even fluorescent lamps. Labels from the bottles showed that these had come from the Philippines, Vietnam and China.

The team collected at least five crates of trash from the area for further study.

Onda said the dried biofilms that clothed the garbage meant that these had been on the water for a long time. Aside from the danger of being eaten by marine mammals like whales and dolphins, the garbage could carry pathogenic invasive species that could affect the local biodiversity of where they might settle, he said.

“It really indicates that the problem is transboundary,” he said. “Even if it’s already far away, our activities still impact these ecosystems.”

During the two-week expedition, the chief scientist noted how human activity continued to affect the biodiversity in the disputed waters. The Philippines, China, Vietnam, Malaysia, Taiwan and Brunei have overlapping maritime and territorial claims in the South China Sea, which includes the WPS.

Wilfred John Santiañez, an assistant professor of UP MSI who was also with the team, said the reefs in the Kalayaan Island Group had also suffered from other threats.

Craters observed at certain reefs indicated cyanide fishing. Pounded corals were also seen. Bleached corals near Pag-asa (Thitu) Island, the largest of nine isles and shoals occupied by Filipinos in the Kalayaan group, may have been caused by the warming ocean waters, worsened by climate change.

The “recruits,” or juvenile corals that the team saw would take time to fully mature, Onda said. The fastest-growing, he noted, would gain only 1 centimeter per year.

He said continuous human activity, such as the Chinese government’s island-building, could have an impact on the fragile reefs and the ecosystem in the WPS.

“You cannot exclude these activities, but we still do not know at this point its direct influence and its extent,” he said.

The team did not experience anything untoward during their voyage. They noted the presence of several fishing vessels from Vietnam and China and saw the structures built at Chinese-controlled Zamora (Subi) Reef.

As the government eyes the Kalayaan Island Group as the next marine protected area, and with the recent Supreme Court decision issuing a writ of kalikasan for some of its parts, Onda expects the results of their study would greatly contribute to effective management of that marine environment.

“It would be difficult to protect and craft policy and management plans if we don’t know what is in there and what we are protecting and managing,” he said.